The year is 1886, and Sergeant Bugs is assigned to protect a U.S. Calvary outpost, Fort Lariat, from invaders. Yosemite Sam, accompanied by local Indians, attempts to invade the fort and fails on several occasions, aggravating the Indians. In the middle of a clash between the returning Calvary and the Indians, Bugs escapes into a hole in the ground, while Sam and his mule do not, and are flattened. 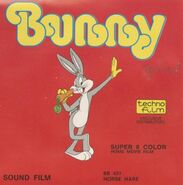