Horton Hatches the Egg is a 1942 Merrie Melodies short directed by Bob Clampett.

Mayzie, a lazy, irresponsible bird, convinces an elephant named Horton to sit on her egg while she takes a short "break". However, free of her commitment, she relocates to Palm Beach.

As Horton sits in the nest on top of a tree, he is exposed to the elements, laughed at by his jungle friends, captured by hunters, forced to endure a terrible sea voyage, and finally placed in a traveling circus. Despite his hardships and Mayzie's clear intent not to return, Horton refuses to leave the nest because he insists on keeping his word, often repeating, "I meant what I said, and I said what I meant. An elephant's faithful, one hundred percent!"

The traveling circus arrives near Mayzie's new Palm Beach residence. She visits the circus just as the egg is due to hatch, after 51 weeks in Palm Beach, and demands that Horton return it, without offering him a reward. However, when the egg hatches, the creature that emerges is an "elephant-bird", a cross between Horton and Mayzie, and Horton and the baby are returned happily to the jungle. 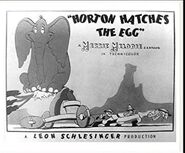 "I meant what I said and I said what I meant. An elephant's faithful one-hundred percent!"