The title is an obvious play on the nursery rhyme Hot Cross Buns as well as a punny allusion to the basic plot.

Bugs is "Experimental Rabbit #46" in the Eureka Hospital Experimental Laboratory, a Paul Revere Foundation, which sports the unlikely slogan 'Hardly a man is now alive'. Bugs lives a pampered life, oblivious to the fact that a scientist plans on switching his mind with that of a chicken.

The scientist brings Bugs out to the operating theater, in front of an audience of fellow doctors. Bugs, of course, thinks he's been brought out to perform. He pulls out all the stops, singing, dancing, scatting comedy routines including his impression of Lionel Barrymore, and magic acts. Upon finishing each act, he looks around to see the unimpressed, stern-faced doctors in exactly the same frame position each time. "What a tough audience! It ain't like Saint Joe!" The scientist attempts to retrieve Bugs but is pushed away. He strikes Bugs with a hammer while the rabbit is in the middle of a scat routine, but Bugs quickly revives and, having failed as the entertainment, becomes a vendor instead, selling hot dogs to the scientists, only to be hammered again. Learning the scientist's intentions, Bugs runs and a chase ensues. Bugs hides in a closet, unaware there was a skeleton in there, and comes out scared. Then he makes a run into a lab and mixes together a concoction whilst running from the scientist; after commanding him to stop, he reveals the concoction in his hand and warns him "One more step and I'll blow ya up!" He says the beaker contains "manganese, phosphorus, nitrate, lactic acid, and dextrose," which causes the scientist to burst out laughing, "That is the formula for a chocolate malted!" Curious, Bugs drinks the entire thing and comments "Yum, Yum! I'm a better scientist than I taught!" Then he hides near an oxygen tent disguised as a Boy Scout and briefly fools the scientist. "That was me good deed for the day!"

Finally, Bugs is rendered helpless with laughing gas and placed on the table. With the metallic mind-switching caps on him and the rather uninterested-looking chicken, the experiment was ready to begin. At the last minute, he somehow cut the wire connecting to his electrode hat and the scientist begins clucking like a chicken, while the chicken with the scientist's mind states in plain English his hope that the experiment can be reversed, "In our next experiment, we will reverse the procedure, I hope." Bugs says, "Looks like Doc is a victim of fowl play!", and then, he laughs. 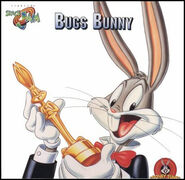 (2010) Blu-ray
The Treasure of the Sierra Madre

"That was me good deed for the day!" 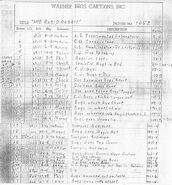