Hugh Harman (31 August 1903 - 25 November 1982) was an American animator and producer. He co-created the Looney Tunes and Merrie Melodies series of theatrical short films with Rudolf Ising for producer Leon Schlesinger and Warner Bros.

One of Harman's notable achievements post-Looney Tunes was creating the Nobel Prize and Academy Award nominee "Peace on Earth" for Metro-Goldwyn-Mayer.

Hugh Harman first worked in animation in the early 1920s at Walt Disney's studio in Kansas City. When Disney moved operations to California, Harman, his partner Rudolf Ising, and fellow animator Carman Maxwell stayed behind to try to start their own studio. Their plans went nowhere, however, and the men soon rejoined Disney to work on his Alice Comedies and Oswald the Lucky Rabbit films. It was during this time, that Harman and Ising developed a style of cartoon drawing that would later be closely associated with, and credited to, Disney.

Harman and Ising had long aspired to start their own studio, and had created and copyrighted the cartoon character Bosko in 1928. After losing their jobs at the Winkler studio, Harman and Ising financed a short Bosko demonstration film called "Bosko, the Talk-Ink Kid". The cartoon featured Bosko at odds with his animator – portrayed in live-action by Rudy Ising; impressed Leon Schlesinger, who paired Harman and Ising with Warner Bros. Schlesinger wanted the Bosko character to star in a new series of cartoons he dubbed Looney Tunes (the title being a parody of Walt Disney's Silly Symphonies). The pair made "Sinkin' in the Bathtub" in 1930, and the cartoon did well. Harman took over direction of the Looney Tunes starring the character, while Ising took a sister series called Merrie Melodies that consisted of one-shot stories and characters.

The two animators broke off ties with Schlesinger later in 1933 over budget disputes with the miserly producer, and went to the Van Beuren studio, which was making cartoons for RKO Radio Pictures. There, they were offered a contract to produce the Cubby Bear cartoon series. Harman and Ising produced two cartoons for this series which were actually released. These cartoons show their distinctive style and are distinguished from the rest of the series. Harman and Ising were in the midst of making a third cartoon when a contractual dispute arose. The pair left Van Beuren, but kept the completed cartoon and finally released it in the 1940s.

Harman and Ising had maintained the rights to the Bosko character, and they signed a deal with MGM to start a new series of Bosko shorts in 1934. The two maintained the same division of work they had used at Warner Bros.: Harman worked on Bosko shorts, and Ising directed one-shots. They also tried unsuccessfully to create new cartoon stars for their new distributors. Their cartoons, though technically superior to those they had made for Schlesinger, were still music-driven shorts with little to no plot. When the new Happy Harmonies series ran significantly over-budget in 1937, MGM fired Harman and Ising and established its own in-house studio headed by Fred Quimby.

Harman and Ising still found work at the time as animation freelancers. Harman and Ising lent their former ink-and-painters to Walt Disney while Snow White and the Seven Dwarfs was behind schedule. Disney afterward commissioned Harman and Ising to produce a Silly Symphony cartoon, "Merbabies", in return. Disney reneged on a deal he had made for two other Harman-Ising cartoons to be produced for the studio. Harman and Ising sold the cartoons to MGM, and Quimby later agreed to hire the animators back to the studio. When Harman got his own unit at the studio, he created the 1939 anti-war cartoon "Peace on Earth", which was nominated for both an Oscar and a Nobel Peace Prize.

In 1941, Harman left MGM and started a new studio with Disney veteran Mel Shaw. The two took over Ub Iwerks' old studio in Beverly Hills, California, where they created training films for the Army.

By 1951, Harman and Ising were back together and making industrial and commercial films such as the 1951 film "Good Wrinkles" made for the California prune industry.

In 1960, Harman-Ising produced a pilot episode for a made for TV cartoon series titled The Adventures of Sir Gee Whiz on the Other Side of the Moon. The unsold pilot for the never-produced series was profiled on episode 6 of Cartoon Dump. Rudy Ising was the voice of Sir Gee Whiz.

Harman and Ising are little known, even among some animation fans. Although they contributed to much of what would later be known as the Disney style, they have been dismissed as mere copycats. In reality, Harman and Ising never attempted to imitate Disney; they were attempting to make refined polished cartoons whose quality would shine in comparison to the work of others. Their repeated attempts to make quality cartoons and their refusal to be bound by budgets led to numerous disputes with their producers. Because of this, they were unable to create any enduring characters. Instead, they created studios that would later produce such characters.

Ising and Harman were portrayed in the feature film Walt Before Mickey by David Henrie and Hunter Gomez.

Harman died at the age of 79 due to complications of an illness. His body was cremated and the ashes were scattered at sea.[1][2] 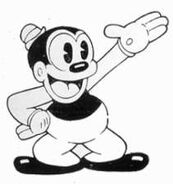