Hyde and Go Tweet is a 1960 Merrie Melodies short directed by Friz Freleng.

Sylvester is sleeping on the ledge of a tall building. After observing mild-mannered Dr. Jekyll drinking a Mr. Hyde potion, and briefly turning into a monstrous alter ego, Sylvester laughs it off and resumes his sleep. In a dream-like sequence, Sylvester chases some pigeons away after their coos disrupt his nap. He then pursues his prey, Tweety, along the building's ledge. Tweety escapes inside and hides in the Hyde formula. Sylvester demands that Tweety show himself, which he does: he's turned into an ugly, giant bird of prey that - after years of harassment and being chased and with payback on his mind - begins chasing Sylvester!

Sylvester is frantically trying to get the elevator to come up, and he turns and looks down the corner, and Tweety Hyde is ambling along, laughing maniacally. For most of the rest of the cartoon, Tweety frequently switches between his usual, innocent self, which Sylvester chases, and the evil bird-monster, which goes after the cat. After several back-and-forth chases, Sylvester nabs a normal-sized Tweety. Failing to realize the monster bird and his potential meal are one and the same, the cat locks himself in a small kitchen, throws the key out the window and begins to "make that Tweety sandwich I've been dreaming of." But while Sylvester is searching for some ketchup, Tweety changes back into his Hyde-like self and devours his adversary whole. Sylvester frees himself and tries to escape the room as his hunter murderously stalks him down.

Just then, Sylvester awakens to realize that this whole experience was a dream and he sees a normal-sized Tweety struggling to fly to the ledge of the building. Sylvester is convinced that Tweety poses a giant risk to his well-being and runs through a wall to escape! Two cats observe his action and refer to it as cowardice. Tweety agrees.

On ABC's The Bugs Bunny and Tweety Show, the scene of Sylvester, who is trying to escape the Hyde-esque Tweety Bird, looking down, getting on the ledge, telling Tweety, "I'll jump," then asiding to the audience, "I've got a choice?" was re-edited to remove the line, "I'll jump! I've got a choice?" as the censors felt it had suicidal implications, and replaced the removed line with the POV shot of Sylvester looking down and seeing just how far he has to jump to get away from the monstrous Tweety. Surprisingly, this wasn't edited when Cartoon Network and Boomerang aired this short, despite temporarily airing a version of "For Scent-imental Reasons" that had a window-jumping scene and dialogue that was censored because it seemingly advocated suicide.[1] 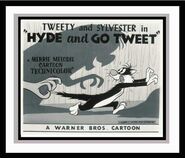 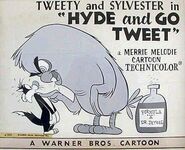 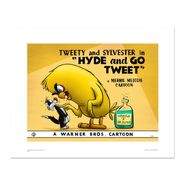