I Haven't Got a Hat

I Haven't Got a Hat

I Haven't Got a Hat is a 1935 Merrie Melodies short directed by Friz Freleng.

Miss Cud the school teacher hosts a talent show with her pupils:

First, Porky Pig recites Henry Wadsworth Longfellow's poem "Paul Revere's Ride", but with his excessive stutter causing him to recite his part with incredible strain and sweat. Though he mixes it up at first, Porky points to offstage students to provide sound effects for his next recital, "The Charge of the Light Brigade", using the underside of a turtle's shell for a drum and falling light bulbs for gunfire. As Porky is in the middle of the poem, the children whistle and cat-call which makes several stray dogs burst into the schoolhouse and chase poor Porky out.

Next, Little Kitty attempts to recite "Mary Had a Little Lamb". She is so nervous that she forgets a couple of lines, even confusing snow for corn flakes, and then proceeds with the rhyme but gradually speeds up her voice to a high pitch. Throughout her performance, she is fidgeting and crossing her legs in a way to suggest she urgently needs the toilet. She reaches the end of the rhyme as she makes a hasty exit to the school outhouse.

Ham and Ex sing "I Haven't Got a Hat". During this performance, Oliver Owl haughtily refuses to share a bag of candy with Beans. After Ham and Ex's performance, Oliver goes up for his piano recital. Beans, still angry about Oliver's snobbery, decides it is time for payback and sneaks a stray cat and dog into the piano. Their commotion creates a virtuoso performance of Franz von Suppé's Poet and Peasant overture to riotous applause. When the animals jump out of the piano, with the cat chasing the dog rather than vice versa, the audience believes that Oliver's playing was all a ruse and boos his performance. Oliver, humbled and vengeful, covers Beans in green ink from his pen, causing Beans to fall off his ladder and launch a pail of red paint onto Oliver. Caught in the same predicament, they make amends and shake hands. 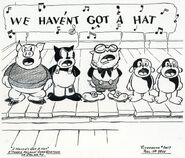 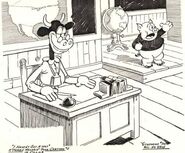 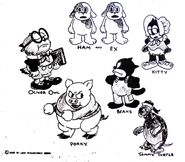