I Taw a Putty Tat

I Taw a Putty Tat

I Taw a Puddy Tat is a 1948 Merrie Melodies short directed by Friz Freleng.

The bird's inability to enunciate certain letters distorts his catch-phrase, part of which forms the title, as in "I Saw a Pussy Cat". This is the first film whose title included Tweety's speech-impaired term for a cat. The "standard" spelling was eventually changed from "putty tat" to "puddy tat".

Sylvester awaits the arrival of a new canary, after the previous house bird has mysteriously disappeared (one of several such disappearances, according to stencils the cat keeps on a wall hidden by a curtain, confirmed by his "hiccup" of some yellow feathers). Upon the arrival of the bird, Sylvester pretends to play nice in order to abuse and eventually make a meal of the pretending-to-be-naive canary.

Tweety physically subdues the threatening cat by smoking him up, hitting him on the foot with a mallet, feeding him some alum and using his uvula as a punching bag.

Sylvester imitates a Scandinavian-sounding maid, who feigns complaining about having to "clean out de bird cage." He reaches into the covered cage and grabs what he thinks is the bird. The canary whistles at him. The confused cat opens his fist to find a small bomb, which promptly explodes, covering the cat in "blackface" makeup. His voice pattern then changes to something sounding like "Rochester", and he says, "Uh-oh, back to the kitchen, ah smell somethin' burnin'!" just before passing out.

Tweety, inside the cat's mouth, yells down its gullet. The answer comes back, "There's nobody here but us mice!"

Tweety has managed to trap Sylvester inside the birdcage, and has introduced a "wittle puddy dog". Their deadly battle occurs under the wrap the bird has thrown over the cage.

The lady of the house calls the pet shop again, this time ordering a new cat, while Tweety lounges in Sylvester's old bed. Overhearing the woman telling the pet shop that the cat will have a nice home here, Tweety reveals the silhouette of a cat now stenciled on the wall, and says, "Her don't know me vewy well, do her?" 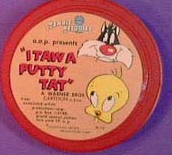 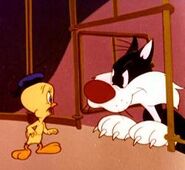 Tweety developing his little muscles at the expense of Sylvester's uvula