Injun Joe is a "Super-Chief" whose territory encompasses the entirety of the continental United States west of the Appalachians. As befitting his title, Joe has super-strength sufficient to rip a mountain in half just by walking through it with durability to match. In both shorts, he attacks a Wagon Train being escorted by Porky Pig to California and attempts to scalp Porky before another character, a slovenly hillbilly named Sloppy Moe, reveals Joe's one weakness is being ticklish which he uses to send Joe falling off a cliff in a laughing fit, thereby ending the Super Chief's reign.

Joe cutting a rock formation into a Statue of Liberty 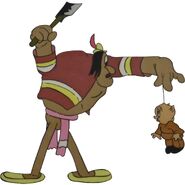 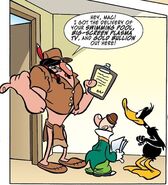 Comic cameo as a delivery man