The title is a play on the phrase "engine trouble," substituting "Injun" which is slang for "Indian" or Native American.

Cool Cat is driving to the town of Hotfoot one day, when his route happens to take him through a Indian reservation. Two scouts spot him and one of them gives chase, only to fall into a chasm when the weight of him and his horse causes the makeshift bridge to collapse (even though it had carried Cool Cat and his car without trouble). Cool Cat rescues them and continues his journey. Along the way, he encounters a man who tries to give his heavily obese daughter away, a more attractive woman that invites him for an "Indian Wrestle" (which turns out to be a fight with a man who is far larger than Cool Cat), a literal bareback rider and a Native American who uses a stenograph-like device to create smoke signals which read "COOL CAT GO HOME!"

Finally arriving in Hotfoot, Cool Cat spots two horses playing human shoes. After that, Cool Cat spots a "Topless Saloon" and heads in, but finds out that the only topless person in there is the bartender, a rather burly man. An outlaw named Gower Gulch then arrives and seemingly challenges Cool Cat to a duel, but then settles for a game of poker. Cool Cat gets a good hand with four Aces, only for Gulch to get a Royal Flush. Announcing that he is "cutting out," Cool Cat produces a pair of scissors and cuts a hole out of the background, into which he then disappears. He then reappears for a moment and says, "So cool it now, ya hear?

Barring its appearance on the syndicated version of The Merrie Melodies Show, "Injun Trouble" has never seen widespread television or home media release, largely in part to the American Indian stereotypes. While bootleg versions are available (most commonly with a time code on the print)[1], this short is considered one of the rarest cartoons in Warner Bros. filmography and is only likely to be sought out by the most purist of fans since the short was created during the twilight years of Warner Bros. animation studios (post-1964), which is considered the worst era (compare with the "Censored Eleven," which were produced during the studio's heyday, and is sought after by casual and hardcore fans alike, mostly for historical reasons and general curiosity as to just how racially "offensive" the Censored Eleven is purported to be). 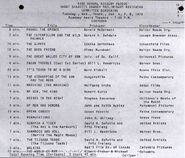 Retrieved from "https://looneytunes.fandom.com/wiki/Injun_Trouble_(1969_film)?oldid=221593"
Community content is available under CC-BY-SA unless otherwise noted.