Jailbird & Jailbunny is the third episode of The Looney Tunes Show.

Daffy Duck, Porky Pig and Bugs Bunny are visiting the Grand Canyon, and Bugs and Daffy go to a nearby gift shop. Daffy looks for keychain with his name on it, but is enraged when there are five "Darvin"s and no Daffys. The trip then goes downhill, when Daffy throws a can of soda into the Grand Canyon, which immediately gains the attention of a park ranger. He tries to lie at first, saying that his named is Darvin Andrewson, but the ranger is not fooled. At court, Daffy tries to pin the blame on Porky, saying that he's stuttering because he's nervous because he's lying because he's the litterer. When that fails, Daffy tries to blame Bugs. The two get into a big fight, causing them to be held in jail for contempt of court. At jail, Daffy is terrified but Bugs is comfortable. For example, Daffy says that the food is awful, but Bugs says that they actually get free food. Later, the two are chased off a cliff by another prisoner, and they land in the ocean. Fortunately, they wound up on land. However, Bugs says that they should turn themselves in, much to Daffy's exasperation. Daffy gives Bugs lessons about how to live on the lamb, but Bugs literally misses jail and at one point starts crying. Eventually, they are caught and put back in jail for a year. After the year is over, the guards have to pry Bugs inch by inch into Porky's car. While driving back to Bugs' house, Daffy throws yet another can of soda out the car window, and the police come... 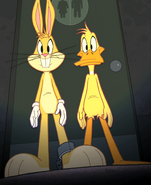 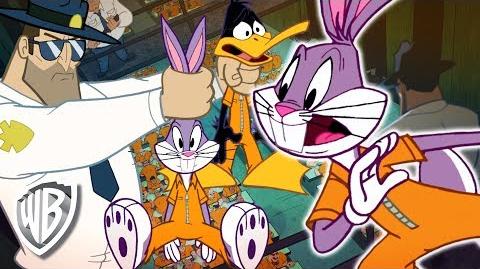 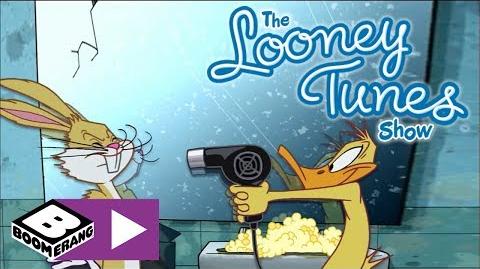 Retrieved from "https://looneytunes.fandom.com/wiki/Jailbird_and_Jailbunny?oldid=233266"
Community content is available under CC-BY-SA unless otherwise noted.