Looney Tunes Wiki
Register
Don't have an account?
Sign In
Advertisement
in: Videos and DVDs, Cartoon compilations, LaserDiscs,
and 2 more

Japanese Looney Tune LaserDiscs are LaserDiscs that have been made in Japan. There are two sets of three discs containing five cartoon collections, both of which are under different titles: Stars of Space Jam and Bugs and Friends.

"Stars of Space Jam" (PILA-1449) is a three disk (five-sided) limited edition LaserDisc set that was released by Pioneer LDC in 1997. The three discs each have their own heavy cardboard sleeves, and they all come packaged in a slipcase-style box. The box is white, and it is wrapped with an orange-colored "obi" strip. The obi lists the Japanese name for this collection ("Best of Warner Animation"), as well as the contents of this collection (also in Japanese). Also included is a B&W insert that gives a history of Warner Bros. cartoons and some background of the directors (in Japanese). The collection is bilingual, in both English and Japanese. 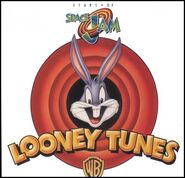 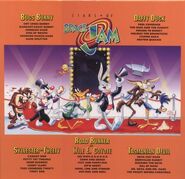 Back Cover of Stars of Space Jam

The contents of this collection are the same as the five-tape set that was released in the USA.

In 1998, Pioneer LDC released a second limited edition boxed set. The English title for this collection is "Bugs & Friends" (PILA-3001). Like the previous set, this one includes 30 cartoons on 3 disks (5 sides). The look of this set is very close to the first set (three cardboard sleeves in a white slipcase-style box w/B&W insert). The "obi" strip this time is green and lists the Japanese name for this collection ("Best of Warner Animation Vol.2"). Naturally, this set is bilingual in English and Japanese.

The inner sleeves feature unique artwork that was never used in the USA. Each side pairs Bugs with a different WB character.

Unlike other laserdisc releases, this laserdisc set also includes a small selection of the lesser-known Depatie-Freleng era cartoons of the mid-1960s. 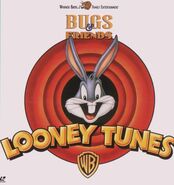 Front Cover of Bugs and Friends 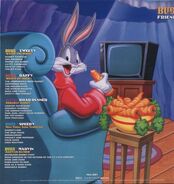 Back Cover of Bugs and Friends

The compilations are unique to this collection.

Even though most of the cartoons in these collections consist of Bugs Bunny, other cartoons feature other Looney Tunes Characters.

The contents of this collection were new dubbed version prints created by Warner Bros. in 1997 with a "THIS VERSION (C) 1997 WARNER BROS." disclaimer on the original ending cards, much like the 5-tape Bugs & Friends VHS collection that was released in Europe.