Porky Pig and his pet Sylvester are camping in the desert. Sylvester is frightened by a nearby howling coyote.

Meanwhile, an Instant Jovian arrives in a flying saucer. Under orders of J. Pluvius, Head Microcosm, it must obtain examples of animal life and return them to Jupiter. It bores its ship underneath Porky's campsite and lifts off with the whole patch of ground while Porky and Sylvester sleep.

Sylvester is scared white as a sheet when the alien inspects the campsite again, but Porky thinks it's just a friendly "Nava-Joe" trying to sell trinkets and beads so he shoos it back to its wigwam. The alien is befuddled so it goes back inside its ship and consults a book, Denizens of the Planet Earth and Their Behavior by Dr. Sig Mundfre Ud.

As they leave the pull of Earth's gravity, Porky and Sylvester and all of their camping equipment float off the flying saucer, and land gently on a passing heavenly body, with Earth visible high in the sky. 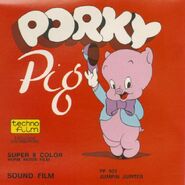