Just Be Cuz is an episode of Taz-Mania directed by Gary Hartle.  It first aired 14 Feb 1995.

Francis X. Bushlad has to spend time with his egghead cousin Edgar, while their dads discuss the mud business. Uncle Nelson claims Edgar is a great hunter, so Francis' dad Felton asks him to take Edgar with him on his quest to capture Taz. Francis tries to show him hunting techniques, but Edgar uses his portable printing calculator to show errors in Francis' ways. After being embarrassed by several failed hunting attempts, Francis decides to use Edgar as bait. As Taz approaches Edgar, an angel and a devil appear on Francis' shoulders and in the end his conscience makes him do the right thing. 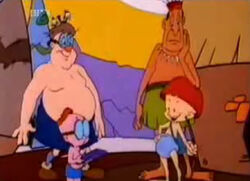 Retrieved from "https://looneytunes.fandom.com/wiki/Just_Be_Cuz?oldid=155497"
Community content is available under CC-BY-SA unless otherwise noted.