In the "Swingology" classroom at Katnip Kollege, the cats are learning about jazz and how to swing. The cats sing a good morning to the professor cat who rises up out of the floor with his desk while producing musical instrument jazz with his vocal ability solely. The professor first calls on Mr Jones to recite his history lesson. Mr Jones sings about Columbus discovering America. Next, the professor calls on Downtown Miss Kitty Bright who sings her homework about Napoleon. Next to be called on is Johnny, who doesn't know how to swing. The professor calls his attempt "corny" and, to make matters worse, gives him a ten-hour sentence to the corner to sit on a stool and wear a dunce cap. All the cats are dismissed, with the exception of Johnny (because he won't go anywhere due to his punishment), at which the other students tease him for not knowing how to swing. Kitty returns his fraternity pin to him as she leaves, and tells him to call her when he learns how to swing.

Later that night, as all the other cats jam at an outdoor caterwaul, Johnny is suddenly inspired by the rhythm of a cuckoo clock. He runs to join the group and shocks everyone with a flawlessly jazzy rendition of "Easy as Rollin' off a Log" sung (and trumpeted) to Kitty. At the end of the song they fall into each other's arms, "rolling" off the log they were using as their stage. Kitty covers his face in kisses as the action ends. 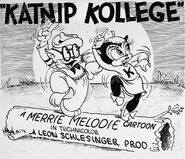 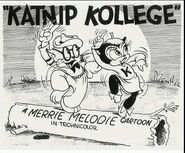