At nine o'clock on a cold winter's night, the neighborhood's cat owners all literally throw their cats out for the night. Porky Pig attempts to do the same, but his four cats, a tall black-and-white lisping cat, a medium sized tabby, a diminutive kitten, and a dumb drunkard cat, throw him out. Porky falls into the snow. Sticking his face out and now resembling Santa Claus, Porky states that he hates pussycats. Porky bangs on the door, demanding to be let in, but the cats pop out of the door and proclaim in unison, "Milkman, keep those bottles quiet!", and then slam the door in his face.

While the cats are lounging around while smoking cigars and getting drunk on wine, Porky throws open the window while making an incredibly menacing face. He chases them around the house until one of them throws him into a teapot. Porky then orders the cats to leave, but the cats still proceed to stick around in the house laughing at his face, causing Porky to retaliate by setting his pet dog "Lassie" on the cats. The cats see the dog's shadow and run for their lives, not knowing that "Lassie" is really only a shadow puppet created with Porky's fingers.

When Sylvester finds out that they've been tricked, he and the others plot revenge. They fake an alien invasion, driving Porky into a panic over "M-M-Me-M-Me-M-M-M-Me-M-Me-M-Men from Mars!" Assuming the appearances of Theodore Roosevelt and his Rough Riders cavalry, the cats charge at Porky and run him out of the house once and for all. Homeless, alone, and cold in the snow, Porky turns and asks "Pardon me, but d-d-does anybody in the audience kn-kn-know somebody that kn-knows somebody that, uh, that has a house to rent?"

The still anonymous Sylvester appears in the film, with a black nose, yellow eyes, and lacking a white-colored tip at the end of his tail. He is joined by, among others, a drunk cat with the red nose, gray fur, big lips, and saggy jowls who was popular enough to appear in several later cartoons such as in the Rolling Stones music video "Harlem Shuffle" with art by Ralph Bakshi and John Kricfalusi, in a few episodes of Tiny Toon Adventures, an episode of Animaniacs, and among the many cats in Tweety's High-Flying Adventure.

Versions shown on FOX's Merrie Melodies Show, The WB, and the United Kingdom's BBC channel cut the scene where the cats smoke cigars, read comics, lounge, and drink wine before Porky bursts in on them.[6] 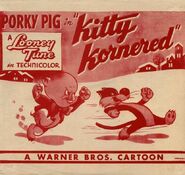