The Latin names are however not found on any of the DFE-era Road Runner cartoons. It is also not used in "To Beep or Not to Beep" (which reuses footage from Adventures of the Road Runner). To date, the CGI Road Runner theatrical cartoons have not yet used any Latin names when describing the characters. 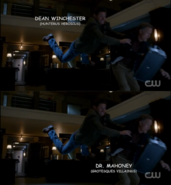