Lickety-Splat is a 1961 Looney Tunes short directed by Chuck Jones and Abe Levitow.

The title is a play on the phrase "lickety-split."

Wile E. Coyote, standing on the road, pulls out an arrow-shaped sign saying "Coyote" and another saying "Apetitus giganticus". Road Runner speeds by with a Beep-beep and ruffles the coyote's fur. Wile flips the signs to read "Road-Runner" and "Fastius tasty-us", and winds up his legs, followed by his body, and chases Road Runner.

When Road Runner sees the Coyote chasing him, he taunts him and gears into superspeed. This causes the road to roll up, a tunnel to turn inside-out, and a bridge to be destroyed as he puts his would-be predator far behind. Wile E. stops short of the chasm, panting, and two light bulbs signal his new-found idea.

Wile E. prepares himself to chase Road Runner with his new roller skis, and skis off the plateau down the mountain and onto the road that Road Runner is dashing over. As the camera cuts separately to Wile and Road Runner, the bird turns across a U-turn at the end of a cliff, while Wile speeds off. When Wile E. realizes his mistake, he drops the ski poles, and soon slams into the side of another cliff. The Coyote looks up and down, trying to figure out how to escape, until he hears and sees Road Runner at the top of the cliff. The skis provide a rather convenient "spring" for Wile E., who uses them to get closer and closer to grabbing Road Runner. Eventually, he grabs within millimeters of his opponent, but unfortunately, the downward force and Wile's weight is too much for the skis to handle this time, and the Coyote plummets to the canyon floor.

Road Runner beeps at Wile E. from across the canyon, and Coyote attempts to shoot himself over the canyon with a bow. Before he can fire himself, the very end of the cliff crumbles and the bow tips over the side. Wile E. flips himself over in the air, but this causes him to bounce up and get his head stuck inside the edge of the cliff. The Coyote initiates a new plan.

Wile E. lights a needle-nosed dart bomb and throws it at a target attached to a cactus, exploding all three items. He then gets in a hot air balloon with an artillery of dart bombs. He sees Road Runner zipping over the road and lights the bombs. Upon lighting, the bombs circle in the air but the last one lands in the Coyote's balloon, blowing it up. He waves at the camera and falls toward the ground, but stops himself by releasing a parachute. Unfortunately, dart #2 blows this up, and Wile E. is left to wave with an "AGAIN" sign before he plummets again. A third dart follows him to the ground and explodes.

Wile E. gives Road Runner a snack while he awaits with a hammer behind a turn. Road Runner approaches, but a fourth dart blows up the hammer handle, and the hammerhead lands on the Coyote's head. The blow causes Wile E.'s eyes to register "TILT!" in the manner of a pinball machine.

The Coyote hurls a newly acquired boomerang at the passing Road Runner, but it disappears behind a rock and comes back around with dart #5 attached and approaches him. The boomerang passes the fleeing Coyote and hovers over one spot. Wile stops moving, thinking he has outrun the bomb, but in reality it is right next to him and blows up before he can run away.

Wile now attempts a simple gun-in-the-woods trap, but a sixth bomb plugs the barrel and explodes. A seventh bomb blows up under a huge boulder and sends it into the air, adding insult to injury to the Coyote when it flattens him.

As Road Runner traverses another road, the Coyote is at the end of a cliff hundreds of feet in the air, holding an anvil ready to drop. An eighth bomb takes out a third of the cliff's edge, and two more darts pepper the floating end. Wile E. jumps onto the "secure" main cliff, but the entire cliff falls down. The Coyote pulls himself on top of the anvil to avoid getting bonked on the head with it.

The anvil smashes through the ground, followed by Wile E. and the floating end of the cliff with the two darts. The Coyote covers his face with his long hare-like ears to prepare for the worst, but instead of exploding, the two darts unfurl into "THE" and "END". Wile E. pokes one eye out at each of them and laughs deeply.

On ABC's The Bugs Bunny & Tweety Show, most of the scenes involving the dynamite darts were cut.

Upside down, Without Wile E.'s Feet 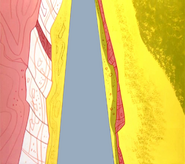