Life with Feathers is a 1945 Merrie Melodies short directed by Friz Freleng.

A lovebird is depressed because his wife no longer loves him, so he decides to commit suicide. He finally settles on getting eaten by a cat. The bird happens on a hungry Sylvester and calls him over with a whistle. Excited, the cat runs to the bird, only to stop when he finds the bird wants to be eaten. Sylvester, thinking the bird is poisoned, refuses. Determined, the bird tries to sneak and even force himself into the cat's mouth, but to no avail.

Finally, the bird tunes into food commercials on the radio to increase Sylvester's appetite. The cat decides he "might as well die" eating the bird. As the feline is about to have a meal at last, a telegram arrives for the bird. It reads that that relations between him and his wife are going to be just fine. Unfortunately, the cat hasn't changed his mind and pursues the bird off a balcony.

The bird, overjoyed, returns home and says that his wife has returned to her mother. A dish is thrown from across the room. It was from the wife, who changed her mind. The bird runs back outside and calls for Sylvester.

On Cartoon Network, Boomerang, TNT, TBS, and The WB the part where the lovebird thinks of different ways to commit suicide after his wife has thrown him out is cut.[3] 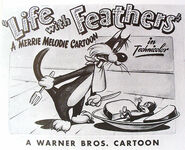 Original titles from a 35mm print