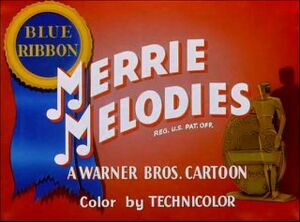 This is a list of Looney Tunes and Merrie Melodies which were given Blue Ribbon reissues by Warner Bros. between 1943 and 1969.

Beginning in September 1943, Warner Bros., in a cost-conserving effort, began to re-release its backlog of color cartoons under a new program that they called Merrie Melodies "Blue Ribbon" classics.[1] For the reissue, the original front-and-end title sequences were altered. The revised main title card began with the "zooming" WB logo, followed by the title logo set against a background featuring a "blue ribbon" (hence the re-release program's title) and a Grand Shorts Award trophy, followed by the name of the cartoon. This revised title sequence eliminated the opening technical credits for the first 13 years. The ending title card was also revised (except for the 1943–44 season and half of the 1944–45 season of reissues, such as "A Wild Hare" and "I Love to Singa" when Schlesinger was still producing the cartoons and cartoons in the Merrie Melodies series originally released between September 1, 1944 and July 10, 1948), replacing the original versions.

The revised title sequences were edited right into the original negative, and thus, the original title sequences were cut away and possibly scrapped, although Tex Avery saved a few of his shorts' original titles from erasure before they were cut.[2] Though some have had their original bullet title sequences and credits restored for official DVD and Blu-ray releases, majority of the re-releases still have the Blue Ribbon credits. In addition, most Blue Ribbon prints of the short, usually through the American and European 1995 Turner prints, can be seen on television packages throughout the world. Some of them, like "A Wild Hare", have edited lines, although the original unedited version is present on The Golden Age of Looney Tunes, Volume 4, Side 1, the Warner Bros. Home Entertainment Academy Awards Animation Collection, The Essential Bugs Bunny, and the Looney Tunes Platinum Collection: Volume 2, Disc 1. Also, several Blue Ribbon prints have altered titles. For example, "A Wild Hare"'s re-release print is also titled "The Wild Hare", "My Little Buckaroo" is titled "My Little Buckeroo", and "The Fella with the Fiddle" is titled "The Fella with a Fiddle". In addition to "A Feud There Was", instead of re-releasing other shorts into the Blue Ribbon program, eight other Blue Ribbon shorts have been re-released twice, scrapping the first re-release titles. They are, "The Cat Came Back" (1944 and 1954), “A Feud There Was” (1943 and 1953) "Of Fox and Hounds", (1944 and 1954), "The Fighting 69½th" (1943 and 1953), "The Early Worm Gets the Bird" (1943 and 1952), "Rhapsody in Rivets" (1947 and 1954), "The Trial of Mr. Wolf" (1946 and 1954), and "Old Glory" (1945 and 1953). However, the latter three were credited Warner Bros. on their first re-release, keeping the first Blue Ribbon re-release closing titles for the second re-release. Starting with the 1947-48 animation season reissues, custom fonts for titles were used. "Dangerous Dan McFoo" was the first cartoon to use this.

The determining of cutting the credits to keeping them would determine which cartoons' copyrights were sold to Associated Artists Productions in 1956, though five cartoons that would remain in Warner Bros.' television packages were re-released under the original 1943 rules and one cartoon that was re-released in the 1952-53 animation season kept its original credits, but still replaced the opening and closing bullet titles.

For the Looney Tunes Golden Collection DVD releases, Warner Bros. went through great lengths to track down whatever elements of the original title credits still exist in an effort to re-create as best they could the original versions of the altered 'blue ribbon' shorts. Some pristine prints of the original issues were obtained from the UCLA Film and Television Archive. As a result, such cartoons as "I Love to Singa" and "Book Revue" can once again be seen as they were originally intended. Unfortunately, there are some "Blue Ribbon" reissue versions of cartoons that are represented on the Golden Collection DVDs as they are the only versions that were made available for exhibition. In any event, to this day there is controversy among animation fans and historians on the alteration of the "Blue Ribbon" releases, primarily the ones re-released between 1943 and 1956.

Description of the titles

For the first few seconds of this part, the Merrie Melodies logo was shown on top, with the legends "A WARNER BROS. CARTOON" (or in the earlier years, "Produced by LEON SCHLESINGER") and either "IN TECHNICOLOR" (1943–48), "Color by TECHNICOLOR" (1948–54), "COLOR BY TECHNICOLOR"/"PRINT BY TECHNICOLOR (both 1954-57, the "PRINT.." variation was used if the cartoon was originally made/released in Cinecolor), or "TECHNICOLOR" (1957–64) being shown on the bottom. Afterwards, the title of the cartoon appeared. The screen darkned upon the viewing of the titles for the 1943-44 and 1944-45 seasons, but after that remained normal. There was one exception to this rule (see "Anomalies" below).

In the 1943-44 and the first half of the 1944-45 season, the original closing was kept, since all of these re-releases credited Leon Schlesinger.

Starting with 1949-50, cartoons from Eddie Selzer started to be re-released and the Merrie Melodies kept their original closing rings while the Looney Tunes were replaced with the Blue Ribbon closing. Starting in 1954-55 season, four Looney Tunes kept their original closings. They went back briefly to Blue Ribbon closings in the 1955-56 animation season. Starting in the 1954-55 animation series, Merrie Melodies originally produced in Cinecolor had their closings replaced.

Beginning with the 1956-57 season, the part where the cartoon's title being showed on the aforementioned background was eliminated. Instead, the original technical credits were shown (though the rings (sometimes the closing if it was select shorts from 1959-64) - but not the original opening and closing music - were still replaced). The original closing was always kept if re-released between 1956 and 1959, regardless of which series the short was originally in.

If the cartoon was reissued and credits Schlesinger's name, the original closing is kept. Some of these old reissues have been reissued twice and have replaced these old titles with the latest reissue.

Cartoons reissued that were originally released from 1937-1940 kept the original closing music, but rings and titles were replaced.

Cartoons reissued that were originally released from September 1944-1951 in the Merrie Melodies category kept their original closings as they were produced by Eddie Selzer and reissued during his career. (Example: "Goldilocks and the Jivin' Bears" was released in 1944 of September (the first cartoon produced by Selzer). It started with the 1951-52 opening rings (evident one red ring a red background and blue rings) but closed with the original 1944 rings (evident from the red background blue rings) as the closing said "Produced By Warner Bros. Cartoons Inc." at the end.) Only shorts originally released in the Looney Tunes series or Cinecolor had the Blue Ribbon closing titles, except for shorts re-released in the 1956-59 animation seasons and "Dough for the Do-Do" (Cinecolor). The 1959-64 season had the closing titles replaced as well.

Cartoons in the Looney Tunes category originally released in 1942-1948 had all credits cut. There were four exceptions to the rule.

The 1940 cartoon "The Mighty Hunters" was the one exception to the original rule. The 1952-53 opening rings and "Blue Ribbon" title card were shown as normal, but then proceeded to the original technical credits. This was the only cartoon which ended up in the a.a.p. package (released prior to August 1, 1948) to be reissued under the 1956-57 (and later) rules.

On the other hand, only five cartoons which WB would keep for their own TV packages (released August 1, 1948 or later) were reissued under the original 1943 rules (the technical credits are removed). These were: "Daffy Dilly", "The Foghorn Leghorn", "Kit for Cat", "Scaredy Cat", and "You Were Never Duckier". The latter cartoon was reissued in the 1954-55 season, while the others were reissued during the 1955-56 season.

"The Foghorn Leghorn", "Scaredy Cat", and "You Were Never Duckier" kept their original closing titles for the reissue.

"Kit for Cat" was the only Looney Tunes while the rest are Merrie Melodies. "Daffy Dilly" is the only one of those five to not have its original technical credits restored, though they are known to exist. (The original titles have been found but are under possession by a museum in Maryland.)

The other four have their original credits restored ("Kit for Cat" has only the opening restored but with the Blue Ribbon closing rings, for unknown reasons, although a 1998 "THIS VERSION" print does restore the original closing titles as seen on the Wideo Wabbit VHS released in Europe.). "Kit for Cat" is the only Friz Freleng cartoon in this category and "The Foghorn Leghorn" is the only Robert McKimson in this category. The other three are directed by Chuck Jones.

Later cartoons re-released in the 1968-69 season were re-released with their original titles.

Many of the above cartoons have been restored for DVD release as part of the Looney Tunes Golden Collection series. However, only a handful of cartoons that were reissued prior to the 1956-57 season have their original technical credits restored. These are:

In addition, "A Wild Hare" (reissued as "The Wild Hare"), and "Hiawatha's Rabbit Hunt" were given a similar treatment for the DVD set Warner Bros. Home Entertainment Academy Awards Animation Collection.

There are three cartoons released after 1948 which have had their original title sequences restored on DVD. "Dog Gone South", "A Ham in a Role" and "It's Hummer Time" are restored on Looney Tunes Golden Collection Vol. 6 and "From A to Z-z-z-z" has been restored on Warner Bros. Home Entertainment Academy Awards Animation Collection.

"A Ham in a Role" and "From A to Z-z-z-z" restore the original opening and ending.

"Hop, Look, and Listen" had its original opening, like "Hiawatha's Rabbit Hunt" restored for its 1995 dubbed version. In 2013, opening and ending were reunited when the former came out on Looney Tunes Super Stars' Sylvester & Hippety Hopper: Marsupial Mayhem. The latter had its ending restored with opening on the Warner Bros. Home Entertainment Academy Awards Animation Collection DVD. This version was double-dipped on the Looney Tunes Platinum Collection: Volume 3 set.

"The Pest that Came to Dinner", "Pop I'm Pop" and "Dog Collared" restore the original opening.

Original titles not yet restored for DVD/Blu-ray releases

The titles for "Bone Sweet Bone" are restored for TV, but has not been released on DVD. However, the original copy with the original titles has problems of its own, as split cuts in this copy cut out the ending lines from when the dog says, "If you think for a moment that this little incident is going to upset me--" then it cuts to him freaking out. The rest of his line, "you're absolutely right", is missing in the original title print. The Blue Ribbon print does not have these split-cuts.

The original titles for "Sunday Go to Meetin' Time", "The Merry Old Soul",[3] "September in the Rain", "Tweetie Pie", "Tale of Two Mice", "House Hunting Mice", "Doggone Cats", "I Taw a Putty Tat", "Daffy Dilly", For Scent-imental Reasons, The Isle of Pingo Pongo, The Scarlet Pumpernickel and Daffy Duck Hunt are known to exist. However, the original audio is also required for the short to be present restored on a home video release.

The titles for "A Day at the Zoo", "Of Fox and Hounds", "The Isle of Pingo Pongo", "Don't Look Now", "Wacky Wildlife", "Johnny Smith and Poker-Huntas", "Thugs with Dirty Mugs", "A Feud There Was", "The Early Worm Gets the Bird", "Circus Today", "The Mice Will Play", "Fresh Fish", "Cross Country Detours", and "I Only Have Eyes for You" were found on eBay in 2007, but never released on DVD.

Sketches and photos of the original titles for "Katnip Kollege", "Farm Frolics", "Sioux Me", "The Fifth-Column Mouse", "Pigs in a Polka", Mouse Menace, The Mouse-Merized Cat, "The Sneezing Weasel", Old Glory, You're an Education, Along Came Daffy, "The Cagey Canary" and An Itch in Time have surfaced, but their real titles have not been found.

The original titles for Rabbit Hood, Beep, Beep and Rabbit Fire are known to exist.

A Sunbonnet Blue, When I Yoo Hoo, Ain't We Got Fun, Booby Hatched, The Good Egg (Merrie Melodies), Daffy Doodles, The Cat's Tale and Rhapsody in Rivets are currently at large.

Retrieved from "https://looneytunes.fandom.com/wiki/List_of_Warner_Bros._cartoons_with_Blue_Ribbon_reissues?oldid=193382"
Community content is available under CC-BY-SA unless otherwise noted.