The title and the cartoon are a play on the 1924 book Beau Geste and its multiple film adaptations. The title also plays on the nursery rhyme "Little Bo Peep".

A fortress in the middle of a desert is home to the French Foreign Legion. The Commandant enters and looks over his group of shoddy, under-developed service men, including Porky, who does not seem to be taking his service very literally. In the inspection line he becomes lazy, and leans against the service man to his left. The Commandant calls out for him, "Porky Peeg!" When he stands at attention, his heels click and he mistakenly trips the rest of the servicemen, and they all end up on the floor. The Commandant is outraged, and orders every man to come to attention again. The Commandant once again calls out for Porky and orders him to follow. Porky imitates the Commandant and bumps into him, who then orders Porky to wash his camel.

A service man rides into the fortress on a camel to deliver to the Commandant a "Camelgram". The cable, from General Sanflee, says that Ali Mode's Riff Raffs have attacked, and to "...come at once -- Time's a wastin!" The Commandant immediately calls his men to arms, and they all leave the fortress, weapons in hand. Porky is on his way to fight the enemy, but the Commandant pulls his camel aside and asks, "Where do you think you are going? We need men, not camel scrubbers!" Porky is devastated, then angry and is left behind, uttering, "I'd rather be a camel scrubber than an old jingle-bell general!" While Porky is grumbling about his treatment, he runs into a large wall-size Wanted poster of Ali Mode (the sinister, unsavory-looking leader of the Riff Raffs, a band of Arab bandits) and is frightened by the disturbing image.

Soon after, thinking at any time Ali Mode might show up, Porky begins nailing the fortress door shut. While hammering, he hears a knock coming from the other side of the door. Porky is startled, and thinks his hammering is an echo. The echo turns out to be Ali Mode who is standing outside the door, playing a trick on Porky. He imitates Porky's yodel and pretends to be a lost sheep, so Porky opens the door to discover that it's Ali Mode who begs to be let in and slams the door shut. Porky fights Ali and his henchmen off single-handed, and for his bravery, earns his place as a jingle-bell General.

Songs in this short include "Fella with a Fiddle" by Charlie Abbott and "Am I Blue?" by Harry Akst. 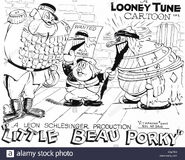