Little Beeper is a young roadrunner with red and orange feathers and blue sneakers and is voiced by Frank Welker. Much like his Looney Tunes counterpart, Road Runner, Beeper spends most of his time outrunning and dodging the efforts put into capturing him by Calamity Coyote. He gets mistaken for a boy skunk by Fifi La Fume at the end of Love Stinks. His uncle is Roadrunner. According to Wile E. Coyote, Little Beeper appeared on Calamity's father's doorstep in the desert alongside Calamity, and the two of them have been given chase ever since. Soon, Calamity's father got a job offer in ACME Acres and both Calamity and Little Beeper moved there to continue the chase. Little Beeper has a summer job as a delivery bird at Bombino's pizza restaurant. Unlike Road's typical bemusement at Wile's misfortunes, Beeper is often shown taking great joy at the sight of Calamity's failures; never passing up a chance to point and laugh at him. However, this attitude has backfired on him more than once. In the worst scenario, at one point Beeper ends up looking like a male skunk and becoming the romantic target of Fifi La Fume. Poetic justice, perhaps, as Little Beeper spends that entire episode ridiculing Calamity, who is in a similar (and smelly) situation. According to Calamity's computer, Beeper is vain and tends to look at himself in a mirror. Little Beeper appeared in "Just-Us League of Supertoons" as "Little Dasher." 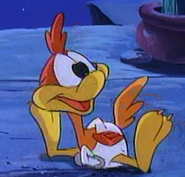 Little Beeper as a baby

Little Beeper as a pizza delivery-boy

A picture of Little Beeper admiring his reflection, as seen on Calamity's computer 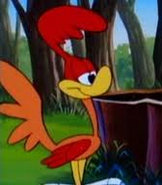 As Little Dasher (a parody of the Flash).
Add a photo to this gallery
Retrieved from "https://looneytunes.fandom.com/wiki/Little_Beeper?oldid=228393"
Community content is available under CC-BY-SA unless otherwise noted.