The full moon is out tonight, shining on the farmhouse at night. The black cat is snoozing by the fire.

Sniffles' is making a dangerous attempt to pull off the cat's whisker. He runs off. The cat chases Sniffles but pauses as soon as Sniffles rushes inside the mousehole.

Sniffles escapes through different areas of the farmhouse. He arrives at the mice's headquarters underground with joy about holding a cat's whiskers. It turns out there is a party going on, and Sniffles is anticipating a party game.

All the other mice turn amazed at hearing Sniffles caught the cat's whiskers: 'Gee, Sniffles really got it', 'Sniffles got it!' say the mice in the crowd.

The judge of the party game reassures Sniffles with surprise, 'Did you really get it Sniffles' and Sniffles shows the evidence. The judge of the game (Scavenger Hunt) crosses a mark on the list of the items Sniffles has so far collected. From looking at the list, Sniffles is in the lead, and after the cross, he has one more item to win: an owl's egg. The judge replies enthusiastically, 'Gee, Sniffles, all you've got to get is an owl's egg and you win!' Sniffles responds reassuringly, 'An owl's egg?' The judge nods. 'Gee Willikers!' and so Sniffles dashes out of the party room in search of an owl's egg.

The cat steps out from the farmhouse and is on the lookout for Sniffles for pulling out one of his whiskers. He turns and finds Sniffles walking and about to make a turn outside the house. The cat looks at Sniffles with a taste of revenge and follows.

Sniffles runs into a mousehole through the fence but the cat just sits and watches. Up inside a barn house - an owl is fast asleep.

Sniffles quickly attempts to hide the egg behind his back. The owl asks smugly: 'Well, having fun?' and he looks around Sniffles: 'Having fun?' The owl slaps Sniffles' hand so that the egg is revealed.

At that moment, Sniffles is in peril. The owl already knows Sniffles is attempting to steal the owl's egg. Instead of attacking or hurting Sniffles, he continues very smugly and acts surprised: 'An egg, a very pretty egg, too. I once had an egg. It was pretty too'.

Then the owl starts to turn cold and frightening towards Sniffles: 'It looked a lot like your egg'. He walks slowly towards Sniffles so he would walk backward; 'And shall we put the egg back in the nest? Before a certain little mouse gets himself--HURT?!'

Sniffles makes a take and dashes to place the egg back. Sniffles returns as the owl walks out with Sniffles to assure he isn't harmful. 'Don't get me wrong. I have nothing against mice. Why some of my best friends are mice'. After acting rather calm towards him - he yells at Sniffles: 'BUT I DON'T LIKE YOU!' He tosses Sniffles out of the barn - 'GET OUT!'

Sniffles falls down (after being tossed out) and is about to lag on the cat. Sniffles then lands on top of the cat - whose body hits the ground but Sniffles springs up to the top.

Sniffles climbs on top of the entrance of the birdhouse but finds himself dangling to keep his balance before he enters inside properly.

Inside the owl's house, as he continues to snooze, Sniffles makes it back inside and the nest is empty; missing an owl's egg. Sniffles is walking away with the bird's nest.

He accidentally trips on a nail in the wooden plank on the floor. The egg cracks and then a baby owl makes an appearance and hoots. Sniffles reacts to the owl hooting. He ties up the egg (after placing the owl inside). Afterward, Sniffles hears the sounds of a 'hoot' and believes he has seen another owl. He unwraps the blue cracked egg to see, but finds the owl (somehow) has got out of the egg.

Afterward, Sniffles wraps up the baby owl inside the egg, but the owl's legs crack open from the eggshell and walks out. Sniffles dives over for the legs and picks him up to his nest before he leaves.

After sliding down the drainpipe - the baby owl has followed Sniffles once again with his 'hoot' sounds. Sniffles turns, and the black cat appears. The glaring eyes read that the baby owl and Sniffles are in danger. This leads to Sniffles about to run for his life but makes a turning when he realizes the baby owl is really in more danger than Sniffles as the cat is approaching him silently. He runs back to collect the owl until the cat starts to chase both Sniffles and the owl.

The owl from at the top of the birdhouse looks down to see what's the commotion. After looking down, the owl begins to fly down to stop the chase.

The owl then picks up the cat and flies him off to dump him elsewhere. Sniffles is still running frantically, but as he turns, he trips and lets go of the owl by accident. Afterward, the adult owl congratulates Sniffles for saving the baby owl, "And as a token of our gratitude, we would like to give you this egg."

He hands over the baby egg to Sniffles to keep. The adult owl says bye before flying away. After waving goodbye to the owl, the egg itself opens with the baby owl still inside hooting. Sniffles makes a trip and looks at the egg mysteriously. 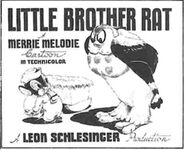 Retrieved from "https://looneytunes.fandom.com/wiki/Little_Brother_Rat?oldid=209739"
Community content is available under CC-BY-SA unless otherwise noted.