Little Golden Books is a popular series of children's books that were first published by Western Publishing on October 1, 1942.

Warner Brothers joined the line of Little Golden Books based on licensed characters in 1949 with Bugs Bunny and Bugs Bunny's Treasure Hunt, followed by Bugs Bunny's Birthday in 1950.

Caroll Spinney recalled looking at a Little Golden Book in his autobiography The Wisdom of Big Bird: "Surrounding a list of other Little Golden Books titles was a border fashioned from a curving musical staff. Dancing along with the musical notes were Minnie and Mickey Mouse, Donald and Daisy Duck, Snow White and Dopey, Bugs Bunny and Yosemite Sam -- and Big Bird and Oscar. These were my characters, perfectly cartooned, dancing with my favorite cartoon characters from childhood... 'My God!' I said. 'I've gotten up there with Bugs Bunny and Mickey Mouse!'" 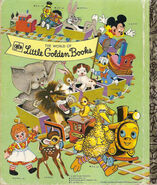 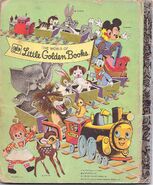 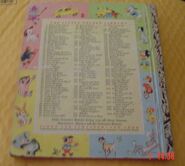 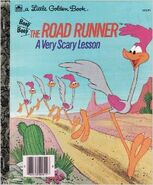 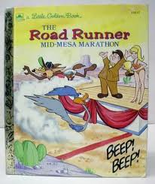 Add a photo to this gallery
Retrieved from "https://looneytunes.fandom.com/wiki/Little_Golden_Books?oldid=164059"
Community content is available under CC-BY-SA unless otherwise noted.