The characters in Loonatics Unleashed were designed by Christian Tremblay and Yvon Tremblay, who created and designed SWAT Kats for Hanna-Barbera in 1994 and Mega Babies.

The first five episodes of Loonatics Unleashed take place in 2772, the year that a meteor strikes the fictional city-planet of Acmetropolis and knocks it completely off of its original axis. However, instead of destroying the planet, the impact of the meteor and its resultant shockwave gives off supernatural cosmic energies that give superpowers to some inhabitants while incapacitating others in its wake. A beautiful, mysterious and powerful woman called Zadavia (voiced by Candi Milo) calls upon six of the affected residents that live in Acmetropolis to form a team of superheroes. She becomes their supervisor, dispatching them for the purpose of combating any and all threats to Acmetropolis and its citizens. The newly formed team is known as the Loonatics and reside on the 125th floor of a large tower, according to the episode "The World is My Circus". These characters are the descendants of the classic Looney Tunes characters, according to multiple press releases and official sources. Descendants of other Looney Tunes are unverified.

Later, in the episode "The Comet Cometh", the city's citizens are celebrating the one year anniversary of the Loonatics' debut, which means that it can be assumed that the episode and all future episodes take place in the year 2773 or later. Additionally, a mysterious character, now known as Optimatus, debuts in the final moments of the episode. He states that the meteor's striking Acmetropolis in 2772 was not an incidental event but actually a deliberate attempt to destroy Acmetropolis. With the first attempt having the effects of the energy release and the Loonatics stopping a second attempt with a larger space rock, he states that he plans to attack the planet a third time. However, a date for said attempt and his motives for trying to destroy Acmetropolis are not revealed at that time. Later, In the two-part special, "Acmegeddon," Optimatus is a key character. He targets the Loonatics, Zadavia, and all of Acmetropolis, hoping to destroy them all.

Weapons and gear used by the Loonatics and usually made by Tech E. Coyote:

The Retrofire Master Blaster looks like a miniature Frisbee at first glance. The Loonatics only have to squeeze it twice, and the "Frisbee" transforms into an arm-mounted cannon that has a special "Thaw" mode, which was originally intended for the sole purpose of melting the giant iceberg. However, when it was used, it had no effect whatsoever.

The Exo-Vac 2400X was constructed by Tech to suck up all of the Fuz-Zs in Acmetropolis when the Loonatics learn that the Fuz-Zs transform into monsters whenever they eat chocolate. When Lexi and Danger are caught by Professor Zane, the rest of the Loonatics drop off the Fuz-Zs at HQ and initiate the "Turbo Vac-Jet Mode" of the vehicle to speed to Zane's lair to rescue their captured comrades. Tech has also called the Exo-Vac the "Ultimate Urban Vacuum."

When the Loonatics head into the zeppelin to rescue Tech, who is now brainwashed by Black Velvet, Ace brings along the Ninjizer 500, which is powerful enough to cut through steel walls with its "Beam Mode." It also shoots nunchakus and shurikens, which somehow reflects the martial-arts expertise of Ace Bunny.

All we know about the Grapple Gun is that it was used by Ace and Tech to pull themselves and their comrades out of Weathervane's tornadoes.

The Space Stream was built by Tech to get to Optimatus' second meteor. On the way to the big chunk of rock, a wave of cosmic energy strikes the ship and sends it tumbling back down to Acmetropolis. Rev quickly downloads a copy of the piloting software from HQ and gets the ship moving again. The ship has a built-in Laser Amplifier that increases Ace's laser vision power to well over a billion times normal. However, when it was used, it only peeled off a layer of atmospheric dust. Duck has often called the Space Stream a "flying dinner plate."

(First Used: "The World is My Circus")

The Gluco-Gel 9000 was designed by Tech to encase targets in a cube of gel. He first used it when he was being transformed into a Galactic Oddity by shooting the DNA Scrambler, thus destroying it. He next used it after the battle with an Oddity version of the Ringmaster by encasing the Ringmaster and Otto in gel cubes.

(First Used: "The World is My Circus")

The DNA De-Scrambler counteracts the effect of Otto's DNA Scrambler, returning anything that was affected by the latter to normal form. Tech first used it on the transformed children, then himself and the other Loonatics, and finally Zadavia. In the battle with the Ringmaster Oddity, it was destroyed after one of its claws crushed it.

(First Used: Stop the World, I Want to Get Off)

Built to nullify the effects of Massive's powers, the Gravity Stabilizer Gyro restores its targets to normal gravity.

When all of the Loonatics' powers are stolen by Sypher, Tech constructs six unique exosuits that are designed to replicate and defect their individual powers. Ace's exosuit has Laser Goggles. Lexi's exosuit has a Supersonic Scream to mess up Sypher's ultra-sensitive hearing. Danger Duck's exosuit has "jellybeans" that randomly change constantly (when one hit Sypher's face, it turned into tar). Tech's exosuit has Electromagnetic Palms. Rev's exosuit has Speed Accelerator Technology. Slam's exosuit has Circular Jets, so he can once again spin into a Tasmanian Tornado. All the Exosuits are colored blue in Sypher, red in Acmegeddon Part II, and black in The Fall of Blanc, Part I and In Search of Tweetums, Part II.

Loonatics Unleashed was widely panned by both critics and Looney Tunes fans alike and is widely considered to be the worst Looney Tunes spin-off show ever made. It was so bad that even Warner Bros. themselves admitted that this show was an embarrassment.[1]

The series scored about 5/10 on IMDb. 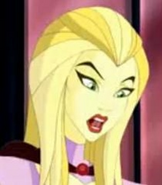 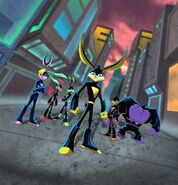