The film begins with a showing of the 1958 award winning cartoon "Knighty Knight Bugs" before going into its opening credits. This is followed up by Bugs narrating how Looney Tunes and Merrie Melodies immediately replaced baggy-pants comedy before introducing us to "a warm-hearted humble little intrevoit called Yosemite Sam".

Yosemite Sam courts Granny with evil intentions for the $50,000,000 she has inherited, but Bugs overhears his scheming and thwarts Sam under the guise of another suitor and later Granny herself. In the end, Sam dies after being crushed by a safe that Bugs drops on him and lands in Hell. Satan offers to give Sam another chance in life provided he sends someone in his place. Sam agrees to this and, as a Roman guard captain, a Saudi Arabian, and in his usual cowboy guise, attempts to kill Bugs. His attempts fail, but when Satan offers him one more chance, Sam denies, stating he'd rather stay in hell than to put up with the rabbit again.

That act is related to a short film entitled, "Devil's Feud Cake". It also shares the same name and concept with an episode of "The Bugs Bunny Show".

Under the codename of "Elegant Mess" (a parody of "Eliot Ness"), Bugs is captured by Rocky and his gang, who try to drown him. Bugs promptly escapes that and then infiltrates Rocky's birthday party that night, disguised as a showgirl. Rocky soon sees through Bugs' disguise and, accompanied by Mugsy, chases him into a cereal factory, where Bugs traps the pair on the cereal manufacturing machine. Afterwards, he brings Rocky to court, but thanks to some manipulations and obfuscating legalese by Rocky's sleazy and unethical lawyer at his trial, the mobster is free to go, whereupon he resumes his crimes.

Bugs has problems finding Rocky's new hideout until word breaks out of farmer Porky Pig's golden egg, which was apparently laid by Daffy Duck. Upon reading of this news, Rocky and his men capture Daffy and demand him to lay a golden egg. He eventually does after Rocky shoots him in the head, and is then ordered to lay more to fill up their collection of egg cartons. Bugs and the police suddenly bust in and arrest Rocky's troop. But another law loophole sets Rocky free yet again.

Rocky then captures Tweety Bird and holds him for ransom, and Bugs appoints Sylvester to find Tweety. Sure enough, the pussycat finds Tweety in Rocky's hideout. After several failed attempts by Sylvester to eat Tweety, the police show up and surround Rocky's hideout. Sylvester ends up being hailed as a hero for having seemingly rescued Tweety, and Bugs brings Rocky to justice, but is forced to go to jail with him and Mugsy (who was likely arrested too) because he lost the keys to his handcuffs.

Bugs introduces us to the Oswald Awards (a spoof of the Oscars), an award ceremony created by Friz for cartoon characters. He then hosts the ceremony himself, announcing the nominees - the Wolf from "Three Little Bops", Sylvester & Tweety, and himself. During all this, Daffy Duck continually gripes about the fact that he has not been nominated. When Bugs wins the award, Daffy becomes furious and challenges Bugs to a talent showdown (as in "Show Biz Bugs"). Bugs seems to have the audience's favor, but Daffy eventually wins their applause by blowing himself up. Bugs gives the now-ghostly Daffy the award, with the duck responding "It just goes to show you, you gotta kill yourself to win an Oswald in this town!"

There was no outro/send-off for this movie, because after the third and final act, Bugs Bunny, at first, does the "That's all Folks!" send-off, but then Porky tells Bugs that it was his line. Bugs then allows Porky to do the send off, but sadly, before he could do the chance, the Iris-Door was used in the opening credits of the movie, instantly closes on him, Porky just grumbles and says, "D-D-Dirty Guys" as the film fades out.

The cartoons used to make the film include:

Also, clips from "Little Red Rodent Hood", "Speedy Gonzales", and "A Pizza Tweety-Pie" can be seen in the introduction. 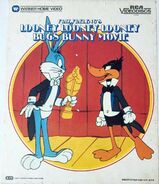 The movie is available for purchase/rent on most or all VOD platforms. (Prime Video, Vudu, iTunes, Fandango, Micosoft, etc.)

Screenshot from the Boomerang LA Channel

This is the cartoon network version form the early 2000s

"Is there anything we can get for you, old chap?"

"Yes. Get me a proctologist, right away."

In 1991 Disney channel censor this clip