The movie was leaked early online and was being sold at Wal-Mart locations on 7 July 2015 prior to its intended release.[3][4]

Lola Bunny is tired of working for Giovanni Jones at the Acme's department store perfume counter. Witch Hazel makes a cameo as Lola sings about her dream of creating her own perfume. She gets fired and takes a ride home in Bugs Bunny's taxi. She screams when she sees a mouse, even though it's her landlord Speedy Gonzales. Speedy gives Lola a gift, a rare flower he brought from Mexico, one that is being watched by General Foghorn Leghorn, his intern Pete Puma, and spy Cecil Turtle. Foghorn sends agent Elmer Fudd to watch the flower, though Lola uses it to create her perfume, which has an invisibility side effect. Cecil sends goons to get it, but Lola backs out the window and falls to Bugs' taxi below. On the way down, the perfume makes the wall invisible exposing, in successive apartments, the Stacey's manager and his shoe customer (from "Hare Conditioned"), The Little Man from the Draft Board (from "Draftee Daffy"), and Red Ryder and his horse. Foghorn puts out a reward for Bugs and Lola, and Yosemite Sam, who was preparing to rob a bank, learns of it and apprehends them. They escape and slip down a storm drain. They emerge through a manhole in front of Porky Pig, but Giovanni grabs the perfume. Lola runs after him and gets abducted by Cecil in a van.

Bugs jumps in Daffy Duck's taxi and follows them. They free Lola and run through Central Park. Daffy envies the ducks there and decides to retire. Sam follows Bugs and Lola to the airport where she spots Giovanni, and they all board the plane, as does Cecil. The flight attendant tells everyone to stay on board after the plane lands, due to fugitives being on the flight. Bugs retrieves the perfume, then makes a parachute from clothes in passengers' checked baggage, and he and Lola land in the ocean. The Goofy Gophers pick them up in their yacht, try the perfume, and discover its invisibility property. After the plane lands, Elmer tells the FBI to search the plane for Bugs and Lola, but they are nowhere to be found. Giovanni Jones is arrested for knowing about the perfume in the baggage claim area.

Bugs and Lola arrive in Paris and spray themselves, but when it rains they find themselves caught between Fudd and Cecil. Bugs tries to throw the bottle into the river but Sam catches it. They all dogpile on Sam, but are suddenly teleported to Mars, and Marvin the Martian grabs the bottle. The goons take off their disguises, revealing themselves to be Instant Martians. Marvin extracts the invisibility part of the potion from the perfume part, but ends up with two identical bottles. Bugs and Lola play switcheroo and end up with both of them.

They are chased to the Transporter Depot, but everyone crams into one pod, overloading the system and causing them all to switch heads, bodies, and other parts. They continue to play body part swap for a while and even Screwball Daffy (from "Duck Amuck") walks across the scene, but they eventually end up restored. Marvin corners them and grabs one of the bottles. Bugs asks about the other bottle, but Marvin claims the second bottle is useless. He then sprays the Earth, with perfume. Everyone else boards the Martian Maggot, but before they blast off, Bugs tosses Marvin the Alludium Q36 explosive space modulator which blows up Mars, leaving Marvin hanging from a root. The Maggot returns the rest safely to Earth, where it sinks into the river. Cecil and Elmer leave while Yosemite Sam is chased by the old woman who swapped her dog with him earlier. Giovanni approaches Lola to apologize and she forgives. He then asks to hug, but Lola rejects. Lola feels bad that Bugs never got to achieve his dream, but Bugs then tells her it's about time he had a new dream. Speedy sees Lola kissing Bugs, while getting his breakfast, complaining that she can "afford a vacation to Paris" but can't pay her own rent. He then rushes to Switzerland to get some hot chocolate.

One year later, perfume mogul Pepé Le Pew introduces Lola's newest scent, "Lola". Lola is signing autographs the next day in New York City. She hops in Bugs' taxi, where he reveals that he still has the invisibility potion. A kid feeds popcorn to the ducks, but Daffy then tells the kid to get him a corn dog, which scares him away. When Porky tries to utter his closing line, Daffy interrupts and Porky bangs him on the head.

Bugs Bunny: [to Lola] Get in the cab.
Yosemite Sam: You're not a-goin' anywhere! Now get in the truck!
Lola Bunny: I thought you said we're not going anywhere.
Yosemite Sam: What?
Lola Bunny: You said: [starts imitating Sam] "You're not a-goin' anywhere!" So do you want us to go anywhere, or not to go anywhere?
Yosemite Sam: Oh, then I mean go anywhere! And by anywhere, I mean my truck! My Lord, I've known you all of two seconds and it feels like you've been bugging me my whole life!
Bugs Bunny: Imagine how I feel. Is that you on those mudflaps?
Yosemite Sam: It was a side business. I took a bath on those things. Want a set?
Bugs Bunny: I'm good.
Yosemite Sam: Get in!
[they get in the van, and Sam calls 911]
NYPD Responder: What is the nature of your emergency?
Yosemite Sam: I gots the two most wanted rabbits in the country and I wants my 500 grand.
NYPD Responder: What's your location?
Yosemite Sam: Times Square, right in front of the bank I was gonna rob! Uh, forget that last part.
[A massive fleet of NYPD cars and helicopters instantly arrive]
Yosemite Sam: That's a fast response time.

Bugs Bunny: ARE YOU CRAZY?!
Daffy Duck: Legally? No. That's not a word for my condition.

Bugs Bunny: Why are you coming?
Daffy Duck: Well, it's not every day a person gets to see the Grand Canyon.
Bugs Bunny: This is Central Park!
Daffy Duck: I thought that was in Michigan.

Marvin the Martian: [grabbing the bottle] If you want something done right, you have to do it yourself.
Cecil Turtle: I was just about to get that for you.
[Marvin snaps his fingers, and Cecil's goons reveal themselves as Instant Martians in disguise]
Cecil Turtle: You're Martians, too?! Oh, I bet you are getting paid more than me.

A kid is feeding the ducks popcorn. The ducks eat it and swim away.
Daffy Duck: Hey kid. Go get me a corn dog, will ya?
The kid screams and runs away. Daffy then sees another duck and swims towards it.
Daffy Duck: What's your name?
The other duck quacks at him.
Daffy Duck: That's a stupid name.
Then, the "That's all Folks!" title appears.
Porky Pig: Th-th-th-th-that's all folks!
Daffy Duck: Interesting.
Porky then whacks Daffy with a frying pan.

"Legally? No. That's not a word for my condition." 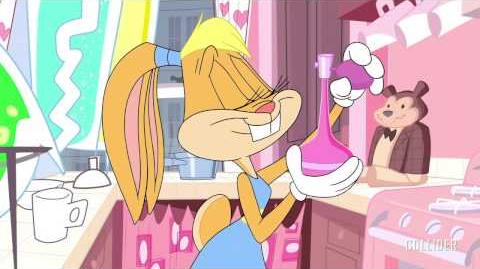