View source
watch 03:01
Wiki Targeted (Games)
Do you like this video?
Play Sound

Looney Tunes is a 1992 video game for the Nintendo Game Boy. It was also remade for the Game Boy Color in 1999. The Game Boy Color version adds six mini-games, which are played between levels.[citation needed]

The game is a side-scrolling platformer. Each level features a different Looney Tunes character in a different scenario (level 1 features Daffy Duck searching for treasure, for example).

Daffy Duck's stage is a side-scrolling platformer. His form of attack is tossing a disc that, after being thrown, will return to him.

Tweety's stage is another side-scrolling platformer that allows you to fly. But during that stage, Sylvester will chase after you.

Porky Pig's stage is a side-scrolling shooter. His form of attack is shooting stars out of the bi-plane he pilots.

Taz's stage is a bonus level.

Speedy Gonzales' stage is a platforming level that involves going through a haunted castle. His form of attack is dancing around while shooting stars.

Road Runner's stage is a horizontal auto-scrolling level. Aside from dodging an avalanche by jumping all around, most of this stage involves being chased by Wile E. Coyote.

Bugs Bunny's stage is a platforming level. He uses the same projectile attack as Daffy Duck. Because this is the final character of the game, there is an area that involves fighting old mini-bosses as well as 2 made for stage mini-bosses. Elmer Fudd is the final boss of the game and is the hardest one of all. For after you bounce on his head a few times, his hat will fly off and he will resort to causing earthquakes by jumping around and shooting off his gun rapidly. Once defeated, a carrot will be the final goal.

After the final boss is defeated and the final item is obtained, a clip show of all the Looney Tunes stages is shown, as well as a credit sequence featuring all of the Looney Tunes characters, including Foghorn Leghorn and Pepé Le Pew, characters that were deemed unplayable.

After the credits are shown the game shows the final score and ends the game with the traditional "That's all Folks!" slogan. 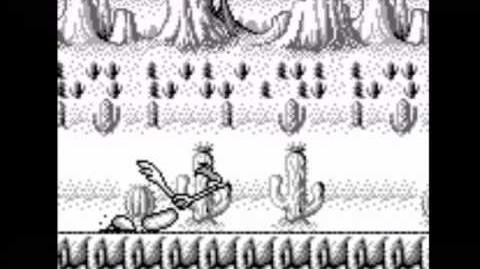