Looney Tunes Cartoons is a revival of the Looney Tunes franchise comprised of one- to six-minute shorts. The series released a ninety-second preview short online 12 June 2019[1], the same day it screened several shorts at the Annecy Film Festival, but made its proper debut 27 May 2020 on the HBO Max streaming service.[2][3][4] This is a departure from recent Looney Tunes productions, as each short has different artists and visual styles.

Sam Register and Peter Browngardt, creator of Uncle Grandpa, are the executive producers for this project.[5] The designs for Looney Tunes Cartoons were previewed in the Warner Bros. Animation logo that was first shown before Teen Titans Go! To the Movies and shown in other Warner Bros. film subsequently.

In 2017, after Browngardt finished Uncle Grandpa, he had a lunch meeting with Audrey Diehl, the creative executive at Warner Bros. She was talking about a project that didn't interest him, so he talked about a project that did. As they wrapped up lunch, Pete said "You know, what I really want to do is to direct a Looney Tunes short." She was surprised that he liked the Looney Tunes and got him with a meeting with Sam Register. Browngardt said he wanted to do it like the old 40s cartoons. He then planned his cast, which was immediately set to Bauza, and he was really a fan of Jim Soper's art on Instagram, so he hired him as a character designer.[6]

The 2020 San Diego Comic Con panel on Looney Tunes Cartoons revealed that the production took particular pains to preserve the aesthetic and style of the original Looney Tunes. The supervising producer, Alex Kirwan, mentioned that while everything was created from scratch, some reporters mistook the faithful designs as reused backgrounds from the original. Aaron Spurgeon, the art director, was also noted as having used interior design magazines from the 1940s to help stay true to the old looks.[7]

On 20 May 2021, Jim Soper wrote that production of the initial order of one thousand minutes of cartoons had finished.[10]

On 1 September 2021, it was announced a TV movie based on the series The Day The Earth Blew Up[13] is currently in the works. The film will center on Daffy Duck and Porky Pig and it will air on Cartoon Network's ACME Night block.[14] 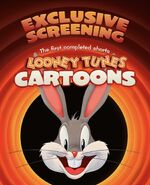 Porky and Daffy series card, which is reminiscent of the 1943-1944 Looney Tunes title card.

Bugs Bunny series card, which is reminiscent of the mid-1940s to the 1960s "Warner Bros. Presents" cards featuring Bugs Bunny.

Foghorn Leghorn series card, which is reminiscent of the "A Fractured Leghorn" title card.

Bugs Bunny series card from Season 3, which is reminiscent of the late 1940s-early 1950s version of the "Bugs Bunny in:" card, albeit without Bugs lying on the "BUGS BUNNY" titles. 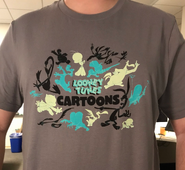 Crew T-shirt prominently featuring silhouettes of Foghorn Leghorn, Hubie and Bertie, and the Gremlin before their debuts in the series.