Louvre Come Back to Me! is a 1962 Looney Tunes short directed by Chuck Jones.

Pepé Le Pew is in Paris. His smell causes Felice to hit a freshly painted flagpole, which puts a white stripe on her back, and causes Pepé to believe that she is a female skunk. He pursues her into the Louvre art galley, where his scent is so strong that the paintings change their poses to show disgust. Felice's boyfriend Pierre has also come to Louvre and challenges Pepé to a duel over her, but is stopped by Pepé's bad smell. 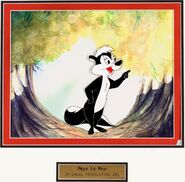 The Bugs Bunny & Tweety Show
Add a photo to this gallery

Retrieved from "https://looneytunes.fandom.com/wiki/Louvre_Come_Back_to_Me!?oldid=231942"
Community content is available under CC-BY-SA unless otherwise noted.