A narrator recalls the character Paul Bunyan and his exploits and stats that many people still question the giant's existence. Then he challenges to ask "a certain rabbit" whether he is real. Just then Bugs Bunny come walking by touting a hobo pack and singing "Blue Tail Fly". He then comments on the unusual looking trees he passes, oblivious to the fact that they are abnormally large asparagus and that he has entered a rather large vegetable garden. He then finds an oversized carrot and lies next to it for a nap under the pretense that it is a boulder. But he quickly rises up and points out that he smells carrots. Turning his attention to the so-called boulder he's propped against, and scratches some of the contents onto his finger and tastes. Suddenly he ecstatically comes to the conclusion that he has discovered a "carrot mine" and starts to frantically dig through the carrot.

On the other end of the garden Paul Bunyan leaves his log cabin for work with his dog Smidgen following behind. Paul instructs the dog to watch over the garden and literally leaves over the mountains.

Back in the garden, Bugs has managed to tunnel through several carrots and lay down tracks for the mining cart he is using to dump the excess carrot chunks over a cliff. When suddenly Smidgen appears, drawn to the sound of Bugs' singing. Annoyed by the tiny intruder, he pulls up the carrot that Bugs is in with his teeth. Bugs comes out, stops at the sight of what he assumes is a large billboard, Smidgen's dog license, and wonders where it came. Suddenly he realizes that he is suspended high in the air, and frantically climbs up the carrot onto the edge of Smidgen's nose. Bugs then sees the large bloodshot eyes staring at him and realizes what he's up against. However, he becomes enraged stating to the audience. "I'll be scared later, right now I'm too mad". He climbs up, approaches Smidgen's eye, and balls his fists to fight. Smidgen takes his fingers to flick Bugs off his bridge, but Bugs jumps up causing Smidgen to flick his own eye. Bugs then walks through the dog's head, out the left ear to the ground below, and runs down the garden with Smidgen not far behind. Bugs then happens upon a wormhole and dives in forcing its previous occupant, a worm, out. Smidgen sticks his nose over the hole and starts to sniff, unbeknownst that Bugs has a feather, which he uses to tickle Smidgen's nose, causing Smidgen to give a hearty sneeze that rockets Bugs into Paul's cabin and inside a moose call horn. Smidgen runs in the cabin, grabs the horn and gives several blows which alert a nearby moose. The moose happily runs after what it believes is another moose, only to find in waiting an enormous dog. Thus, the moose flees yelping like a dog. Smidgen then gives the horn another blow sending Bugs flying into the barrel of a revolver. Smidgen then fires it sending the bullet Bugs is riding on into a nearby apple in a fruit basket. Smidgen grabs the apple and takes a large bite leaving Bugs' backside exposing. Smidgen then eats the entire apple, grabs a toothpick to pick his teeth, and walks away assured that Bugs is taken care of. But when he picks his teeth, Bugs comes out unharmed on the top of the toothpick. Bugs then hops up grabbing Smidgen's ear and wraps it around Smidgen's head covering his eyes. Then Bugs dives into the hair on the back of Smidgen's neck. From there, Bugs proceeds to scratch the surface of Smidgen's skin. This causes Smidgen to shiver, coo, and moan in pleasure. With the dog distracted, Bugs exits via Smidgen's leg and leaves the cabin. Smidgen chases after Bugs, only now he wants him to continue scratching. Bugs, feeling he's safe, stops to catch his breath, not knowing Smidgen is right behind. Before he knows it, Bugs is licked by the dog's enormous tongue which lift him off the ground each time. Bugs tries to run away, but stops at the sight of something. Quickly he sees the world's largest pine tree and calls Smidgen's attention to it, and the dog runs off to it.

The cartoon was produced in both 3-D, and in 2-D for theaters that lacked 3-D equipment.[1] At the very beginning of the cartoon, the zooming "WB" shield seems to leap into the laps of the viewers, springing much farther forward than normal before returning to its usual position. The effect is heightened by a much different sounding "buoinng" sound effect before the Looney Tunes theme plays. The closing sequence is modified as well, with the "That's All Folks!" script fading in rather than being written out. 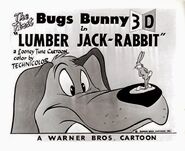