Looney Tunes Wiki
Register
Don't have an account?
Sign In
Advertisement
in: 1963, Shorts, Cartoons directed by Chuck Jones,
and 13 more

Mad as a Mars Hare is a 1963 Merrie Melodies short directed by Chuck Jones and Maurice Noble.

The title is a play on the phrase "mad as a March hare."

Marvin the Martian observes the planet Earth from Mars through a telescope. He is examining a rocket launch that is taking place. As he watches, the rocket takes off from Earth and soon appears to be heading straight towards him. Soon enough, the rocket lands on Mars, and a reluctant Bugs Bunny exits it. It is quickly apparent that he is the only occupant and he has been lured onto the rocket by a carrot and then sent to Mars as what Earth considered an expendable "astro-rabbit."

Bugs immediately claims Mars, using a metal carrot with a flag inside, in the name of Earth. However, Marvin does not agree with this and decides he will not allow Bugs to take his planet away from him. After failing to disintegrate him with his disintegrating pistol, which resulted in Marvin getting disintegrated himself and going off to be re-integrated, "Being disintegrated makes me very angry! [huff, puff] Very angry indeed!", Marvin gets his time-projector gun and sets it to revert Bugs forward into time so that he can use him as a lifelong slave. However, when Marvin zaps Bugs, though Bugs tried to beg for mercy, which of course makes Marvin angry, he realizes too late that he had the gun in reverse, so Bugs is reverted into a Neanderthal Rabbit, who immediately grabs Marvin and crushes him with just one hand; Marvin goes off to be regenerated again, while saying "Well, back to the old electronic brain!" Bugs then eats the metal carrot and says Elmer Fudd and all the hunters back on Earth are going to be in for a big surprise when Bugs gets back to Earth. 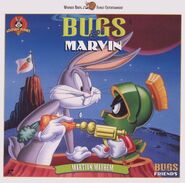