Looney Tunes Wiki
Register
Don't have an account?
Sign In
Advertisement
in: 1962, Cartoons directed by Chuck Jones, Shorts,
and 16 more

Martian Through Georgia is a 1962 Looney Tunes short directed by Chuck Jones and Abe Levitow, and co-directed by Maurice Noble.

On a planet far off in space, there is a race of Martians who are advanced and have happiness all throughout their lives, except for one Martian who's fed up with his homeworld's perfect society. Levitating in the air, passing through solid objects, and projecting images from his blue antenna do nothing but bore him. When an attractive female Martian offers to pitch some love to the Martian, he just turns her away, causing her to melt.

The Martian goes to see a psychiatrist, who recommends that he travel to another world to cure his boredom. The Martian leaves in a flying saucer that is launched by slingshot and sent deep into space. After punching a hole in the Big Dipper, he enters the Earth's solar system and stops at Earth. While observing the typical Earth activities, television antennas, people with huge and little cars, children watching Cowboys and Indians on TV, and teenagers dancing to jukebox tunes, the Martian discovers he likes this planet and decides to land there.

As the flying saucer lands in Atlanta, Georgia, a crowd of people gather round the Martian and run away screaming "Monster!" The Martian is confused about the monster everybody's talking about and is arrested by the police for landing in a "no parking" zone. After he is questioned by the authorities and put in a jail cell, the Martian leaves by passing through the walls, causing the prison guard to cry out for his mother while he sounds the escape whistle.

The next morning, a tall man and a short man are reading the newspapers about the Martian's escape. The tall man makes a comment about the Martian based on the newspaper's description, "Terrible thing, this raving alien monster, roaming the countryside, devouring innocent people, striking terror into the hearts of millions, and leaving behind a trail of chaos and destruction." The short man scolds, "If you can't say anything nice about someone, you shouldn't say anything at all." As the tall man walks away, the Martian hugs the short man, causing the short man to turn white with fright and call the Martian exactly the same description the tall man gave before fleeing in terror.

Still confused about the "monster," the Martian vows to seek out and destroy him. As the Martian passes a construction site, he spots a steam shovel at work. Assuming this is the monster everybody's talking about, he whips out an ACME Atom Rearranger and shoots the steam shovel, turning it into a dragon that licks the construction worker and waddles off. Satisfied that the "monster" has been destroyed, the Martian walks off confidently, eager to do more good deeds for Earth.

As the Martian passes a red-haired boy reading a comic book, the boy says "Hello, Monster," directly to the Martian. Confused as to what the boy said, the Martian asks the boy why he called him "monster," and the boy points out something he'd found in his comic book, a page that informs the reader that a space monster has no nose, which the Martian doesn't have. The Martian gets the idea to remove his antenna and put it on his face to pass it off as a nose, but the boy just says, "Goodbye, Monster."

Now realizing that he is the monster, the Martian runs through a nightmarish landscape as voices all around him call him monster and berate him to go home. Just as the Martian ducks into an alley, the narrator recommends that the Martian just commit suicide since nobody loves him. The Martian takes out his ray gun and is about to blow his brains out when the narrator reminds him that somebody does love him. Taking this advice to heart, the Martian puts his antenna back in place on his head and remembers the single sexy female Martians, including the one he'd turned down earlier. Now wanting to seek happiness back on his home planet, the Martian blasts off back home, a star in a constellation of stars that picture a heart.

Most TV versions of this cartoon in the United States, particularly on the channels ABC, The WB, Nickelodeon, Cartoon Network, and Boomerang cut the moment in which the Martian runs through an abstract hell of people yelling and screaming, holds his ears to block out the noise, and tearfully putting his space gun to his head, with the narrator encouraging him to commit suicide if he truly feels that no one loves him. While the other three channels used a fake black-out to delete the entire line and scene, Cartoon Network and Boomerang left in the Martian running through the chaos of people panicking and holding his ears, but paused on the shot of the Martian fearfully wincing to cover up the offending scene of the Martian about to blow his brains out while the narrator's line, "If you're an unwanted monster, what are you going to do? Commit suicide? Why not? If nobody loves you..." was cut down to "If you're an unwanted monster, what are you going to do? Nobody loves you..."[1][2] This scene was left intact on MeTV. 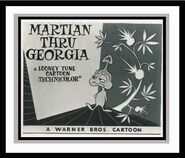 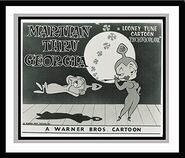 Martian Through Georgia (Music & SFX Only)

"The Bugs Bunny and Tweety Show"