An guffawing spider (voiced by Cy Kendall) spots his intended prey, a mute fly, on the ceiling, and indulges in various cat-and-mouse schemes to try to catch him for food, including painting a load of buckshot with "Kandy Kolor" and luring the fly to eat it and drawing him closer with a magnet, which only succeeds in attracting a set of metal cutlery which the spider has to dodge to save himself. Eventually, the spider catches his prey, and, when he is about to carve him up while singing the song "Would You Like to Take a Walk?", the fly points to a wall calendar giving the day as "Meatless Tuesday", a reference to food rationing during World War II. The frustrated spider runs to the United States Capitol and screams, "You can't do this to me! You just can't! You can't, you can't, you can't, you can't!" 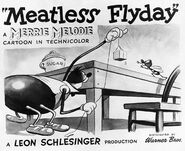 Retrieved from "https://looneytunes.fandom.com/wiki/Meatless_Flyday?oldid=192544"
Community content is available under CC-BY-SA unless otherwise noted.