Melvin Jerome "Mel" Blanc (30 May 1908 – 10 July 1989) was an American voice actor, comedian, radio personality, and recording artist. Although he began his over-sixty-year career performing in radio, he is best remembered for his work with Warner Bros. as the voices of Bugs Bunny, Daffy Duck, Porky Pig, and many of the other characters from the Looney Tunes and Merrie Melodies theatrical short films, during the Golden Age of Animation.

Blanc was born in San Francisco to Russian-Jewish parents in 1908. As a kid, he grew up in Portland, Oregon. While growing up, he had a thing for voices and dialect, which he started to voice at the age of ten. At sixteen, he claimed that he changed the spelling of his name from "Blank" to "Blanc", because a teacher told him that he would amount to nothing and be like his name, a "blank". Blanc joined the Order of DeMolay as a young man, and was eventually inducted into its Hall of Fame.[1]

Blanc had some musical knowledge. After graduating from high school in 1927, he split his time between leading an orchestra, becoming the youngest conductor in the country at the age of nineteen, and performing shtick in vaudeville shows around Washington, Oregon, and northern California.[2]

His voice acting career with Warner Bros. began in 1937 with the cartoon short "Picador Porky", in which he voiced two hobos who disguise themselves as a drunken bull. By 1944, Blanc had become the first voice actor to receive on-screen credit for his work, beginning with the Bugs Bunny short "Little Red Riding Rabbit".[3] According to Blanc's autobiography, he was given this exclusivity by Leon Schlesinger in exchange for not getting a raise.[2] The compromise enabled Blanc become a favorite voice actor to cast for other productions, even though it meant his fellow players in the company like June Foray would work in relative obscurity for years more.

Having earned the nickname "The Man of 1,000 Voices," Blanc is regarded as one of the most influential people in the voice-acting industry. Over the span of his career, he was in over five thousand cartoons and did over four hundred different voices for them.[4]

In addition to Looney Tunes and Merrie Melodies, Blanc had done voice work for cartoon studios including Disney, Screen Gems, MGM, and Universal before he was signed to an exclusive contract with Warner Bros in 1941. For Disney, Blanc had recorded dialogue for Gideon the Cat, Honest John's sidekick, from Pinocchio, but went unused after the studio decided to make him mute similar to Dopey from Snow White and the Seven Dwarfs and the only material that remains of him includes three hiccups that he had recorded. At the MGM cartoon studio, Blanc had done voice work for cartoons that were directed by Looney Tunes co-creator Hugh Harman where he would often play leading parts such as the squirrel grandfather in the Oscar nominated short "Peace on Earth" and the titular character in "Tom Turkey and His Harmonica Humdingers", along with voicing John Silver in the ill-fated The Captain and the Kids film series and Count Screwloose in two cartoons that were directed by cartoonist Milt Gross. He also did voice work for the Screen Gems cartoon studio including the first Fox and the Crow cartoon, Frank Tashlin's "The Fox and the Grapes", which Chuck Jones cited as the inspiration for the Wile E. Coyote and Road Runner cartoons.[5] Blanc was also the original voice of Woody Woodpecker for Walter Lantz Productions, but only voiced the character in his first few theatrical shorts. However, he did reprise his role in recordings for Capitol Records from 1948 until 1955.

After his exclusive contract with WB expired in 1960, he also provided voices for the TV cartoons produced by Hanna-Barbera. His most famous roles during this time were Barney Rubble of The Flintstones and Mr. Spacely of The Jetsons. His other voice roles for Hanna-Barbara included Dino the Dinosaur, Secret Squirrel, Speed Buggy and Captain Caveman. Blanc also provided vocal effects for the Tom and Jerry theatrical shorts directed by Chuck Jones in the mid-1960s. He was also heard in several commercials for Froot Loops as Toucan Sam and for Frito Lay as the controversial Frito Bandito. His final original voice role was the comic-strip character Heathcliff during the 1980s.

One of his final performances was in the 1988 live-action/animated movie Who Framed Roger Rabbit, in which he voiced Bugs, Daffy, Porky, Tweety and Sylvester for their appearances in the film (though Joe Alaskey voiced Yosemite Sam in Blanc's place).[2]

His final acting role was in Jetsons: The Movie, which was released one year after his death, where he reprised the role of Mr. Spacely. However, Blanc died during production of the film and had not finished recording his dialogue leading to one of Blanc's successors, Jeff Bergman, finishing his remaining dialogue. The film was dedicated to his memory alongside George O'Hanlon, who voiced George Jetson and also died during production of the movie. 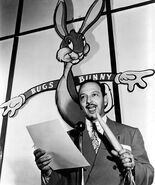 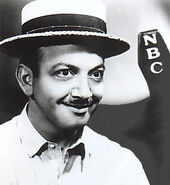 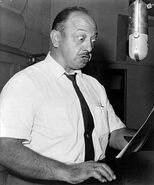 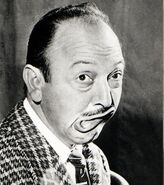 Early photo of Blanc's family; Mel is on the bottom left 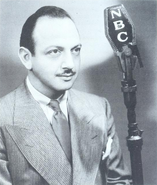 Mel and his wife Estelle Rosenbaum in 1935

A family portrait of Mel, Estelle, and their son Noel 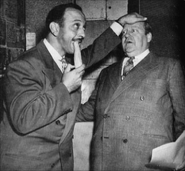 With a young Noel Blanc

With Chuck and June

Caricature from "People Are Bunny" 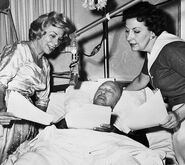 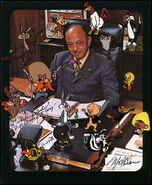 With his various Looney Tunes and Hanna-Barbera characters

With Friz Freleng and Chuck Jones at the Academy Awards

With his cat Hodge

With Joseph Campanella, Chuck Jones, and Joseph Barbera on This Is Your Life

"Speechless" tribute to Mel Blanc following his death in 1989

Caricature of Mel (right) from Pinky and the Brain

"A Salute to Mel Blanc"