Melissa Duck is an animated cartoon character in the Looney Tunes and Merrie Melodies and in the animated television series Baby Looney Tunes.

She is featured as Daffy Duck's blonde girlfriend in several cartoon shorts but is only called Melissa in one, "The Scarlet Pumpernickel". Melissa seems aware of Daffy's extreme faults but loves him all the same, proving love is indeed blind.

In "The Duxorcist", Daffy is called in to rid her apartment of ghosts. Upon getting a good look at her, Daffy falls head over heels in love with her, and the second he kisses her, the feeling is mutual for Melissa, as hearts appear in her eyes. After he performs an exorcism, a grateful Melissa is cured and kisses Daffy, who runs out after the ghosts start chasing him. As he runs out, Melissa tells him he is welcome back anytime.

Melissa Duck was the inspiration for the Shirley the Loon character in Tiny Toon Adventures, a spin-off series which follows the adventures of the next generation of Looney Tunes, though Melissa never featured in an episode of that show.

Melissa Duck's most notable role is from the series Baby Looney Tunes, which casts the adult characters from the original Looney Tunes theatrical shorts as their infant selves. Melissa had a crush on Daffy Duck ever since she was an infant. In Baby Looney Tunes, Melissa, a yellow duckling with darker hair than her adult self, acts as a comedian and enjoys making her friends laugh, even though her humor sometimes causes her trouble.

Melissa becomes a monster in "The Duxorcist" 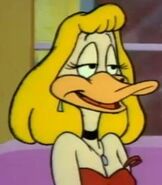