Merlin of Monroe is a minor character from the Looney Tunes franchise who first appeared in the 1955 short "Knight-Mare Hare". He is a mischievous old sorcerer that lives in a tower in the middle of Nowhere who briefly clashed with Bugs Bunny, which resulted in Merlin being transformed into a donkey.

Since his debut, Merlin Monroe has been an incredibly obscure character, only having made less than a handful of cameos in backgrounds of Looney Tunes media during the 90s. However he was given a surprisingly significant role in the 1999 video game Bugs Bunny: Lost in Time, where he was made Bugs Bunny's friendly mentor, helping him to escape the past, and serving as a guide for the player during tutorials. 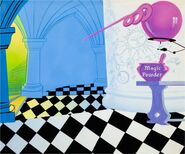 Background of the interior of Merlin's home