Merlin the Magic Mouse is a 1967 Merrie Melodies short directed by Alex Lovy.

Merlin the Magic Mouse and his sidekick Second Banana head to the theater to start their magic show. Once inside, Merlin asks Second Banana to count the house. Second Banana states that Merlin's audience has increased from an empty house to one cat. Merlin realizes that there is going to be trouble if the cat finds out he is a mouse, so he puts on a fake mustache disguise to trick the cat.

The show starts, and Sam boos at Merlin. Merlin tells the cat "applause, you nincompoop", and Second Banana uses a clapping wheel to simulate clapping. For his first act, Merlin will pull a rabbit out of his hat, but the rabbit bites him as he attempts pulls it out. Second Banana suggests Merlin to use a carrot to lure it out of the hat, but it yanks him into the hat.

For his next act, he requires a member from the audience to saw them in half. The only audience member, Sam, is left weeping that he will get hurt, but Merlin states that Sam has nine lives and he has nothing to lose. Second Banana is unable to find the rubber saw and replaces it with a real saw. Merlin saws through the boxes, until it saws through Sam, causing him to yelp in pain. Second Banana then finds the rubber saw, and apologizes to Sam, but this causes the fake mustache to fall off.

Sam realizes that Merlin is indeed a mouse and chases after him and Second Banana. Merlin starts to use his real magic, such as blacking out the stage to put Sam up into chains, faking flowers with a stick of dynamite with two fuses on each end, and an Indian rope trick. Merlin and Second Banana then flies off in a magic carpet, but Sam decides to chase after them on a rowboat attached to balloons. However, Merlin hides behind clouds to fake out the cat and flies off to a different place to do their show. 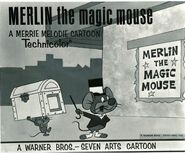 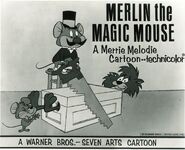 Retrieved from "https://looneytunes.fandom.com/wiki/Merlin_the_Magic_Mouse_(short)?oldid=222116"
Community content is available under CC-BY-SA unless otherwise noted.