Two cats named Jose and Manuel are singing in an arch. Speedy Gonzales appears and greets them asking if they want a big fat juicy mouse for dinner; Manuel responds by landing on top of him, but he escapes. Jose explains to Manuel that he's Speedy Gonzales the fastest mouse in all Mexico. Manuel asked how he get him. Jose climbs down the arch telling that they are going to eat him. They travel down the road singing.

They finally arrive at Speedy's town and find Speedy's house. Jose tells him that he and Manuel are having a celebration and begin dancing. Speedy steps out of his mousehole and joins them they proceed to hit him with a mallet, but he disappears and appears on Manuel's head and Manuel calls Jose to get him. Jose tells him not to move. He tries to hit Speedy with his mallet, but he misses and hits Manuel, knocking him out. Jose chases him, and Speedy returns to his mousehole, and Jose walks away.

Later, they lower a cheese at Speedy's mousehole. Jose tells Manuel about the plan like to Bugs Bunny. Speedy grabs the cheese dragging Jose with him all the way to Los Angeles and Jose tries to hold him back but only pull his tail fur off. Manuel is pacing back and forth wondering where Jose is who been away after being dragged away by the fast rodent, then notices Jose arrives with a bundle stick carrying on his shoulder and is happy to see him back. Jose and Manuel lit a dynamite on Speedy's mousehole and hide on a corner waiting for the explosion. Speedy appears behind them unnoticed with a balloon in his hand and pops it causing the cats to check the mousehole. Jose blocks it from Manuel asking what he is doing and he replies that he want the mouse but he shouts it's mine not yours. Manuel tries to grab the mouse and Jose grabs his tails causing them both to fight each other over to Speedy. Jose pushes Manuel away and looks inside the mousehole seeing the dynamite hasn't exploded and goes to Manuel that he was right and rightfully yours and Manuel thanks him and Jose welcomes him. Manuel goes to Speedy's mousehole and looks inside and Jose covers his ears. The dynamite explodes on Manuel's face causing him to lament "Caramba!"

Jose and Manuel plant minefields on the road. Jose tells Manuel that Speedy will blow by the mines when he steps on them. Speedy appears behind them and gives them a scare causing them to fly through their hats. He lures them on the mines. Jose climbs on Manuel fearing he will get blow too and Manuel carries him to where no mines are and he thanks him, but as Manuel puts him down a mine explodes sending him into the air. Outraged he picks him and drops him one of the mines and falls on the ground dazed. Jose glares at Manuel and walks away angrily, "Stupid!"

Later at the corner, Manuel tells Jose that Speedy has a cousin named Slowpoke Rodriguez the slowest mouse in all Mexico. Jose goes to Slowpoke's mousehole and hides on a column. Manuel chases him trying to tell something about Slowpoke. Slowpoke walks out of his mousehole and Jose grabs him. Slowpoke lifts his gun and shoots him as Manuel arrives too late telling that Slowpoke has a gun given by his cousin. Slowpoke returns to his mousehole and blows the smoke out from his gun, leaving Jose to lament, "Now he tell me." 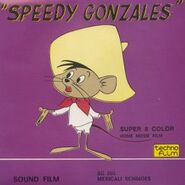 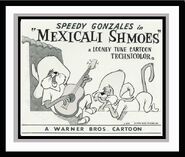