Speedy Gonzales' cousin Slowpoke Rodriguez pays a visit to Speedy's hacienda. Sylvester the cat believes that he will be able to have Slowpoke for dinner. Incorrectly, because it turns out that Slowpoke is much smarter than he looks when Slowpoke uses hypnosis on Sylvester after getting captured, hypnotizing the cat to become a slave for the two mice! "Maybe Slowpoke is pretty slow downstairs in da feet. But he is pretty fast upstairs in the cabeza." A hypnotized Sylvester waves the hand fan around the table while Speedy and Slowpoke have cheese for supper. Slowpoke says, "I like your pussycat friend. He's nice and stupid." 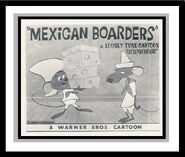