The title is a pun on the famous Mexican song "Mexican Hat Dance".

The mice of a Mexican town decide to take over a local bullring after Toro the Bull scares the matador out of the arena. Speedy Gonzales will be the matador to Sylvester, who will be the bull at their bullfighting tourney. When the mice arrive at the bullfight arena, Speedy shows up in his matador outfit. As the battle begins, Sylvester completely misses Speedy and slides into the wall. Sylvester chases after Speedy who then nails Sylvester with a pin, which launches him to the side and makes the audience mice laugh. Sylvester scares the mice off, but Speedy asks if he is chicken. The two of them run in circles until Sylvester crashes into an anvil. Sylvester then gets back up and can't find Speedy anywhere. Speedy scares Sylvester who hits his head on the anvil again. The mice laugh at Sylvester and cheer for Speedy, but then Sylvester scares Speedy who scares him back.

Sylvester chases Speedy across the arena only to crash into a wooden door. Sylvester then lights a stick of dynamite. He then hurls it towards Speedy who throws it back to Sylvester. Sylvester throws it back to Speedy who then puts glue on it and gives it back to the cat. Unable to toss back the dynamite stick, Sylvester covers his hand in the ground as the dynamite explodes. The explosion causes a large part of the ground to attach to Sylvester's hand, who falls to the ground crushed. Finally, Sylvester tries to catch Speedy with Rocket Powered Skates to nab the fast mouse, but he is unable to control the skates and he is launched out of the arena and burrowed through the ground into the desert. As the mice cheer for Speedy, Speedy says, "I like that pussycat fellow! He's stubborn like a bull!" 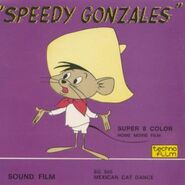