In 1941, Maltese was hired by Leon Schlesinger Productions, which three years later became Warner Bros. Cartoons, Inc. Maltese appeared on camera in a 1940 Porky Pig cartoon as a live-action guard at the Warner Brothers entrance gate, who winds up chasing the animated Porky around the Warners lot; the short is entitled "You Ought to Be in Pictures" and was directed by Friz Freleng. He and Chuck Jones collaborated on classic cartoons like the Academy Award-winning "For Scent-imental Reasons" and the animated public health documentary, "So Much for So Little" which won that same year for "Best Documentary Short Subject." Maltese was also the voice of the caricature of himself in "Wackiki Wabbit". Some of his best known cartoons are "Feed the Kitty", "Beep, Beep", "Rabbit Seasoning", "Don't Give Up the Sheep", "Duck Amuck", "Bully for Bugs", "Bewitched Bunny", "From A to Z-Z-Z-Z", and "Beanstalk Bunny". These were all directed by Jones. Maltese also collaborated with Jones on Tom and Jerry. From 1958 until 1970, he worked at Hanna-Barbera Productions on television cartoons such as Quick Draw McGraw, The Flintstones, and The Jetsons. His off-the-wall humor inspired some of the sharpest wit in the Warner Brothers canon. Only Maltese would imagine he could "improve" Richard Wagner by the addition of deliberately insipid lyrics, such as he created for the schmaltzy "Return My Love" sung by Bugs and Elmer in "What's Opera, Doc?" Tongue in cheek, he even took a screen credit for his lyrics. Maltese also did scripts for comic books published by Western Publishing, including for many of the same Warner Brothers and Hanna-Barbera characters whose animated exploits he scripted. 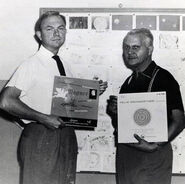 With a Jackalope in Tex Avery: King of Cartoons 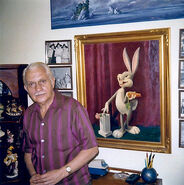 With a portrait of Bugs Bunny

As a security guard in "You Ought to Be in Pictures" 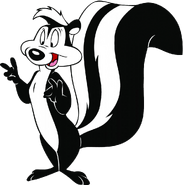 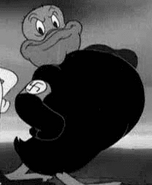 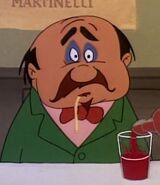 Customer ("A Hound for Trouble")

Indian ("A Feather in His Hare") 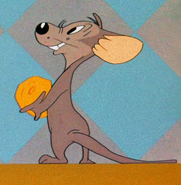