Looney Tunes Wiki
Register
Don't have an account?
Sign In
Advertisement
in: Males, Looney Tunes: Back in Action, Characters,
and 11 more

Michigan J. Frog is a minor character who has appeared on occasion in the Looney Tunes film-shorts, having debuted in "One Froggy Evening" in 1955, and has the most prominence as the mascot of The WB Network and its programming block Kids' WB! Ed Sullivan influenced the character, as told by Chuck Jones.

He is a frog with quite a talent for singing and/or dancing.

In "One Froggy Evening", a member of a wrecking crew finds a frog sealed in a box that he discovers in the cornerstone during an old building's demolition. To the man's amazement, the frog is capable of dancing vaudeville-style and singing classic songs of the 1890s in a baritone voice. Seeing the monetary potential of the frog, he tries to exploit it, but in every attempt to do so, it is incapable of performing for anyone other than its owner. Eventually, the construction worker becomes so utterly broken that he reburies the frog in a building that is under construction; it is dug up by another would-be moneymaker years later in 2056.

Initially created without a name, Jones named him "Enrico" in the bridging sequences of The Bugs Bunny Show in the 1960s. He must have forgotten, because the character was later given the name "Michigan J. Frog" when "One Froggy Evening" was announced in the 1970s to be on the following week's episode of The Bugs Bunny Show. The name comes from "The Michigan Rag", a song written for the cartoon that the frog sings at one point. The middle initial was later added as a suggestion made to Charles Jones in an interview.

Despite having only appeared in only one classic-era cartoon, Michigan became a popular figure. His first new appearance was in the Tiny Toon Adventures episode "Psychic Fun-Omenon Day". Here, he is a seemingly dead frog whom Hamton J. Pig is assigned to dissect. To Hamton's surprise, Michigan is very much alive, but just like in the frog's original appearance, the pig's classmates do not believe him when he tells them his frog was singing.

Michigan's next appearance, which came in the very next episode, "The Wide World of Elmyra", also marked his only appearance as a villain. He torments Tyrone Turtle as he tries to cross a busy freeway while trying to escape Elmyra Duff. In the end, Elmyra ends up capturing Michigan in the place of the turtle.

In 1995, Michigan went on to his most prominent role of the 1990s, in which he served as the mascot for The WB Television Network. That same year, he also starred in a newly-made sequel entitled "Another Froggy Evening". Here, Michigan is discovered by various people in history, all of them resembling the construction worker from his first film, and all of whom fail to exploit him for money. By the end of the cartoon, the last person to find him (a desert island castaway) decides instead to eat him, but Michigan is then beamed up onto Marvin the Martian's spaceship, where he agrees to sing for Marvin (according to Marvin, Michigan's croaking sounds are actually him speaking in Martian language).

Michigan also made background cameos in Who Framed Roger Rabbit, Space Jam, and Looney Tunes Back in Action, and most recently, he appeared as a talent show emcee in the Duck Dodgers episode "Talent Show a Go-Go". Besides this, he has made frequent cameos in the Looney Tunes comic books, one of his most notable being the Superman & Bugs Bunny mini-series, where he performs only for Green Arrow, who is naturally unable to convince anyone else that he has a singing frog.

On 22 July 2005, Michigan's "death" was announced by WB Network Chairman Garth Ancier, at a fall season preview, with the terse statement "The frog is dead and buried." The head of programming for the WB Network, David Janollari, announced services will be held for Mr. Frog, but failed to give details. Janollari stated that "[Michigan] was a symbol that perpetuated the young teen feel of the network, [but] that's not the image we [now] want to put out to our audience." Various humorous obituaries for the mascot were published with details on Michigan's life and death. His dates were given as 31 December 1955 - 22 July 2005. Despite this decision by Ancier, Michigan J. Frog still appeared in some WB affiliate logos and in TV spots until the network shut down in September 2006.

In The Bugs Bunny Show

As the mascot for The WB Network 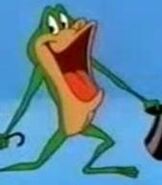 Rendered in CGI animation in a 2002 WB Network ID 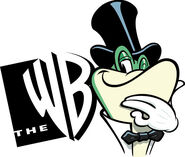 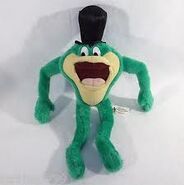 Next to the Kids' WB logo 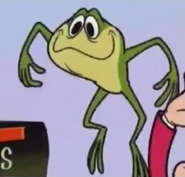