Minah is a small and seemingly almighty mynah bird. He has a blank emotionless face and personality, and he always walks to the tune of Mendelssohn's "The Hebrides". Minah played a major role in every Inki cartoon short and has made several small appearances in Looney Tunes, Tiny Toon Adventures, Animaniacs, The Sylvester & Tweety Mysteries and Tweety's High-Flying Adventure. Minah in all cases appears in the middle of a conflict and proceeds to resolve it in his own unique way. Everything in the jungle is terrified of Minah apart from Inki and lions due to them being unaware of his reputation. In the shorts Minah always makes a huge, intimidating entrance which he doesn't seem to live up to having a small and non-intimidating appearance but he does live up to it in his abilities. Minah always gets in the middle of a conflict and causes physical pain to both sides (the amount of pain received is consistent to the size of their part in the conflict). Minah's abilities include escaping in a maze of holes, disappearing into thin air, reappearing out of seemingly anywhere whenever and wherever it is least expected or most convenient, and making other things disappear and reappear. Minah has regularly given brutal beatings to dogs, lions, and in one case a 28-ton dinosaur but always comes out completely unharmed.

The Minah Bird in his first appearance in all black feathers

Minah Bird, Inki and the Lion

Model sheet of the Minah Bird

The Minah Bird on top of Inki's head 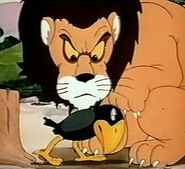 The Lion and the Minah Bird with dark green/gray wings 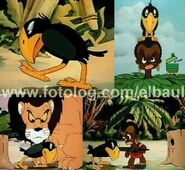 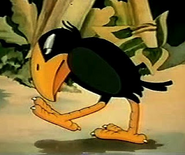 Minah Bird with a bone tied to his hair 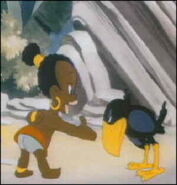 Inki wanting to shake hands with the Minah Bird