The title is a pun on the book Moby Dick.

A ship has crashed into an island. Daffy Duck and Speedy Gonzales are sitting sadly on a pair of rocks. Daffy complains he's all alone on a deserted island. Speedy points out he's here too and offers Daffy his company, but the duck spurns him, complaining Ducks can't eat mice and kvetches that Speedy can barely speak English.

Daffy paces as he wonders how he's going to get food. When Speedy says he can run, Daffy demands Speedy find some food for him. Speedy however is just as clueless as Daffy is, and instead decides to pace along with him.

While pacing Daffy stumbles across a box on the shore. It is filled with canned goods. He runs over and is happy that he is finally going to have some food. Speedy is also happy that there's food for him and Daffy, but Daffy greedily tells the mouse that he's not to going to share any of the food with him. Speedy begs him for at least a crumb, but he still refuses.

Daffy notices that the food is all in cans. He learns that Speedy has a can-opener inside his pocket. He begs Speedy to give it to him, and Speedy offers it, if the duck will give him a few cans of food. Daffy however refuses, walking away saying "I never saw such a selfish mouse." He opts to open the can the old fashioned way, with a rock. Daffy then attempts to open it with a boulder, but this backfires, and it hits Daffy. Speedy continues to offer Daffy his assistance, lowering his price down to one can, but Daffy stupidly refuses, saying that he'll starve to death before he trades with him.

While walking Daffy sees an Axe and attempts to open the can with it, but it backfires as the ax blade falls off the handle and into the ocean. In response Daffy throws a temper tantrum, whacking the can with the handle. In a gag that is likely recycled from Rabbitson Crusoe Daffy attempts to open the can by putting it up near his but, and asking a swordfish to run near it, only for the can to fall off, and instead Daffy is stabbed by the swordfish, which he heals with a cast.

Speedy returns and gives the can-opener to Daffy, apologizing for being selfish. Daffy however still refuses to give Speedy the food, and he fights him for the can opener, all the while the food is washed near the shores of a rock. Daffy attempts to get it, but a group of angry sharks force him back, which upsets him.

Speedy reveals the real reason why he offered Daffy his can-opener so easily. He happens to be dining with Robinson Crusoe at a restaurant on Friday, which is located around the deserted island.

Daffy rushes to the restaurant, but when he learns of its special, pressed duck, he's scared off, and swims into the ocean. 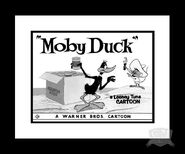 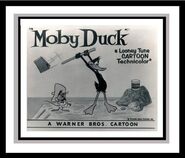