Montana Master "Monty" Max is a character in Tiny Toon Adventures. He is like his mentor Yosemite Sam: red hair, a violent temper, and a hatred for certain rabbits. His relatives are Yosemite Sam and Ophiuchus Sam. He was played by Danny Cooksey.

Max is a spoiled, rich boy who lives in a huge mansion at the far edge of Acme Acres. He treats everybody badly, and he has no friends to put up with him.

He is the main antagonist of the series Tiny Toon Adventures, as revealed in the premiere episode, The Looney Beginning, in which he was promised to have his very own cartoon, but was rejected because of his bratty disposition. Seeking revenge, he kicks Buster Bunny and Babs Bunny out of their own creation, steals their scripts, and takes over the show, retitling it "The Montana Max Show." To save their show from disaster, Buster and Babs enter his mansion disguised as Max's heroes, Yosemite Sam and Elmer Fudd. As they leave, Max sees through their disguises, and turns on the booby traps scattered throughout his mansion. 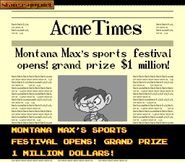 Montana Max In A Published Newspaper

We're In The Money

Max In Tiny Toon Adventures:How I Spent My Summer Vacation

Montana With A Bunch Of Thugs 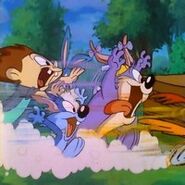 Add a photo to this gallery
﻿
Retrieved from "https://looneytunes.fandom.com/wiki/Montana_Max?oldid=203039"
Community content is available under CC-BY-SA unless otherwise noted.