Porky Pig is a very frustrated homeowner trying to rid of a very pesky mouse with an attitude and with enough nerve to leave messages for each of the mouse traps that fail. Porky tries to trick it out, but it doesn't work and the mouse only causes him to make a mess in his house! He thinks of what other things he could do to stop the mouse, not realizing that the mouse has been following him and copying him. With no other ideas in mind, he tries hiring a domesticated cat, and later a mountain lion, to do the work for him. But none of the cats prove to be effective, as the mouse frequently defeats them and throws them out of the house bound and gagged with the cat tied up to a missile, and the mountain lion stuffed.

Just as another leaves, the mouse marks it down, revealing he had got rid of thirty of them! Porky then tries to hire a gangster-like cat who has many weapons concealed in his violin case. He then goes to knock on the mouse's door, which ends with the Mouse pushing a huge iron ball onto his head.

So he calmly packs up and leaves, making Porky resort to building a robotic cat. Porky gets behind the robot, revealing "Kill Mouse" as one of his function buttons, along with spit, stand up, claw, purr, and lie down. He tests it out by pushing the "stand up" button. It does, and is apparently very cuddly! Porky takes out a toy mouse from a chest inside his garage and he winds it up to see how the robotic cat reacts. He pushes the button "Kill Mouse" and the robotic cat proceeds to do so, then eats it.

Very happy with the results, Porky then sicks it onto the actual mouse. It actually puts up a fight too, as the mouse sees it approach it runs into its hole and tries to throw another heavy ball onto its head like it did with the previous cat. But this doesn't hurt the robotic cat at all! It gets bent up when it lands on its back and the mouse, out of shock runs from the cat. It then tries to melt it, shoot it, and blow it up.

The mouse is cornered and tries to run back to its mouse hole but the robotic blocks him and keeps blocking all of the mouse holes until the mouse finds one it didn't get to. So he quickly paints it to look like a mouse hole, then paints a message above the hole saying, "Thru this portal passed the most beautiful mouse in the woild!" So naturally the robotic cat thinks the mouse went into that hole and he puts his hand into it, causing to get a huge shock! But this does not mean its beat and it runs around the corner to see the mouse playing with a toy. The robot wants to see the toy, but the mouse refuses, only making it cry in response...

The mouse hands over the toy, then proceeds to try to melt and overheat the robotic kitty-cat once again but he is caught in the act and runs away. It then yanks a rope so hard it causes the robotic cat to decapitate itself! The cat manages to find a toaster and puts it onto its neck, thinking it was its head. It does regain its original head soon enough though as the mouse makes it trip and fall near it.

Eventually the mouse has no other resort but to try to blow everything up using nitroglycerin, uranium-filled items, and dumping out the contents of dynamite into metal mice and other objects. The mouse then sends out one of the metal mice as the cat sneaks over and off it goes! When it comes to a slow stop, the robot cat sneaks up on it, then jumps on it causing a chained explosion! The entire house goes up in flames, including the trees around it.

Despite this, Porky comes out from the hole he was in to see that a very few things actually have withstood the explosion, such as a fireplace and a dog house. He is very happy to finally be rid of the mouse, but the mouse comes out of a small hole and says "Should I tell him?"

(1986) VHS
Porky Pig Cartoon Festival Featuring "Nothing but the Tooth" 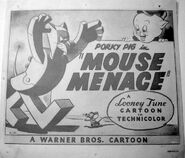