Mr. and Mrs. Is the Name

Mr. and Mrs. Is the Name is a 1935 Merrie Melodies short directed by Isadore Freleng.

Buddy the Merman is playing tag with a girl Mermaid on the seafloor. They discover an old sunken ship with treasure and an old piano in the hold. She plays the piano and sings the title song along with a lobster. While she is singing, a savage octopus abducts her and the chase is on! After Buddy and the octopus fight, with the octopus getting the better of him, Buddy is able to tie all its legs to the end of a pipe and bash it in the head with an old piece of broken mast hanging from a rope. As he is bashing the octopus with the mast, the girl approaches and kisses Buddy. He turns away and blushes, the mast swings back and knocks him into her arms.

(1997) LaserDisc
The Golden Age of Looney Tunes, Volume 5, Side 4, Musical Madness (1995 Turner dubbed version)
Add a photo to this gallery 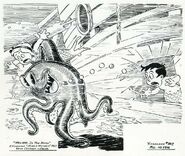 Retrieved from "https://looneytunes.fandom.com/wiki/Mr._and_Mrs._Is_the_Name?oldid=244059"
Community content is available under CC-BY-SA unless otherwise noted.