Looney Tunes Wiki
Register
Don't have an account?
Sign In
Advertisement
in: 1938, Cartoons directed by Friz Freleng, Shorts,
and 12 more

My Little Buckaroo[3], reissued as My Little Buckeroo, is a 1938 Merrie Melodies short directed by Friz Freleng.

In 1872, in Boiled Beef, Texas, a thief is robbing the town of their possessions. After he steals their possessions, he runs to the county line so he can be safe from the townsmen who chase him. He repeats this process multiple times, but one day, a sheriff pig sees his antics and decides to catch him. The thief succeeds in stealing items again the next morning, but little does he know the pig is on his tail.

As the pig is following him, he tries to shoot the thief with a gun, resulting in the thief shooting back. Every time the thief shot back, the pig got a new hat, eventually returning back to the old one. The thief looks at the road ending ahead and takes an escalator to escape. The pig follows him and eventually both of them are riding their horses down many sloped hills. They then ride down a large slope.

The pig's horse wants to slide down the slope again, begging his master. His master obliges, but this allows the thief to get away. Though the pig was still on the cliff, as a final attempt to catch the thief, the pig uses his long rope to reel in the thief. Luckily, he succeeds.

Back in the pig's office, he is relaxing. To the left, the thief's head stuck in a wood carving, with the rest of him behind. He tries to get out of it, but he can't. 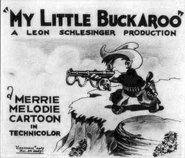