My Little Duckaroo is a 1954 Merrie Melodies short directed by Chuck Jones.

The Masked Avenger (Daffy) and his sidekick Comedy Relief (Porky) ride along in the desert until they come across a poster offering a ten-thousand-dollar reward for Nasty Canasta, wanted dead or alive for crimes including horse stealing, candy stealing, gag stealing, and square dancing in a round house. "This looks like a job for the Masked Avenger," he shouts. "And besides, it isn't the principle of the thing, it's the money."

Following large conspicuous signs to Canasta's hide-out, Daffy tells Porky to wait outside 'whilst I go in and fix his little red wagon'. Daffy bursts into the hide-out, to find Canasta sitting peacefully at a table playing cards. He announces himself as the Masked Avenger but Canasta pays no attention until Daffy offers advice on his card game. Challenged to play cards, Daffy departs and returns in new cowboy garb, confident of victory.

Daffy is humiliated again and again through different challenges. First, the game is ended abruptly when Canasta cuts the deck with a meat cleaver. Canasta then sends Daffy through the table in response to Daffy's challenge to an arm wrestling match, to which Daffy responds, "I think you're pretty tough, don't I?" Porky suggests Daffy should just arrest him. When Daffy puts Canasta in irons and tries to take him away, he finds that he can't move Canasta from the spot he is standing. Daffy becomes annoyed and angry, and tells Canasta that he is going to give him a fist beating. Porky's encouragement of Daffy, telling him to fix Canasta's little red wagon, only ends badly for Daffy, as Canasta rips his shirt right off just by flexing his muscles before beating up Daffy. The house shakes as Porky sits out side whittling with a knife and a stick. Daffy then emerges from the house after a few seconds, dazed and confused with slurred speech, proclaiming that he indeed fixed Canasta's little red wagon. Daffy walks outside the house with a shiny new looking red wagon. "I told you I'd fix his little red wagon. You should've seen it. The wheels were busted, The axle was all bent, and it needed a new coat of paint. Now I'm going home to mother."

When this cartoon aired on ABC's The Bugs Bunny & Tweety Show, the following scenes were cut[1]: 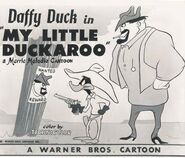 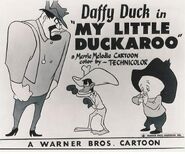