Nasty Canasta is a character in the Merrie Melodies and Looney Tunes series who made appearances in three cartoons. Created by director Chuck Jones, Canasta is depicted as a tough, hulking, and brutish-looking outlaw and is normally more intimidating than other typical villains. He was originally voiced by John T. Smith, then Mel Blanc took the role for his second appearance, with Daws Butler voicing him in "Barbary-Coast Bunny". He also appeared in the Super Nintendo Entertainment System game Bugs Bunny Rabbit Rampage as the second boss, as well as Looney Tunes: Back In Action as a henchman of Yosemite Sam.

Nasty Canasta made appearances in three cartoons. Created by animator Chuck Jones, Canasta is depicted as a tough, hulking, and brutish-looking outlaw. He was originally voiced by John T. Smith, then Mel Blanc took the role for his second appearance, with Daws Butler voicing him in "Barbary-Coast Bunny".

Daffy Duck is about to take a drink at the bar when Nasty Canasta, playing on the flatness of two-dimensional animation, walks in past his 'Wanted' poster. Daffy tries to intimidate Canasta with his gun, but Canasta just bites off most of the gun and swallows it ("Hmm. Probably didn't have his iron today!"). Canasta then intimidates Daffy with a drink made of various poisons and toxic materials (so 'hot', when two ice cubes are put in, the ice cubes jump out, yelping). Canasta downs the drink with no side effects (other than his hat flipping), and when Daffy gets Porky to take the drink with seemingly no side effects, Daffy downs his as well. A few seconds later, Daffy and Porky exhibit wild side effects, turning green, reciting Mary Had a Little Lamb in childish voice and mannerism, and acting like they're both motorized. Eventually, Daffy challenges Canasta to a showdown in the street. Daffy and Canasta start walking towards each other, the street deserted, when Porky winds up a small British soldier doll and lets it go towards Canasta. Canasta picks up the doll, chuckling, until the doll points its gun at Canasta and fires, sending Canasta to the ground.

The townspeople come out cheering, and Daffy assumes that they are cheering for him, but Porky is the hero of the hour. The next day, Daffy is shown wearing a sanitation worker's uniform and pushing a dumpster, and comments about how he has cleaned up the 'one-horse town'. Porky, now the town sheriff, comments 'Lucky for him it is a one horse town.'

Canasta returns in "My Little Duckaroo". When we first see Nasty Canasta he is sitting peacefully at a table playing cards. Upon proclaiming himself the Masked Avenger, Daffy fails to grab the attention of Canasta (stating "Didn't you hear me, I said I was the Masked Avenger. Look, see my mask? It's a very nice mask."), who still sits peacefully at his table dealing cards. Daffy then vies for the attention of Canasta, leaving the scene and returning first as the whip-wielding (and stereotypically Mexican) "Frisco Kid", then in a suit reminiscent of Superman's as "Superguy." Again failing to grab his attention, Daffy suggests other identities he could take, names parodying heroes of the time ("Captain Hideo? The Green Fathom? Mark of Zero?"), but none interest Canasta. He finally grabs the attention of Canasta after offering a helpful suggestion to his card game ("Say, why don't you play your red jack on the black queen?"). Challenged to play cards, Daffy departs and returns in new cowboy garb (but sans mask), confident of victory. What follows is the humiliation of Daffy again and again through different gags and challenges. First Daffy is asked if he plays cards, to which the game is ended abruptly when Canasta cuts the deck with a meat cleaver. Canasta then sends Daffy through the table in response to Daffy's challenge to an arm wrestling match, to which Daffy responds, 'I think you're pretty tough, don't I?'. Porky then suggests to Daffy that he should just arrest him, to which Daffy agrees ('well, you may have something there comedy relief'). But when Daffy puts Canasta in irons and tries to take him away, he finds that he can't move Canasta from the spot he is standing. Daffy then gets annoyed and angry, to which he responds by telling Canasta that he is going to give him a fist beating. Porky's encouragement of Daffy ('telling him to fix Canasta's little red wagon') only ends badly for Daffy, as we see Canasta rip his shirt right off just by flexing his muscles before beating up Daffy, who staggers away broken and defeated, describing Canasta's little red wagon's condition in terms like it was literally a child's broken down toy and announces that he's now going home to mother, before collapsing.

In "Barbary-Coast Bunny", a rather different version of Nasty Canasta—now with a dopier look complete with pudgy lips and crooked teeth (and voiced not by Mel Blanc, but by Daws Butler)--steals gold from Bugs Bunny. That prompts Bugs to say: "You do realize that it is not going to go unchallenged." Six months later Nasty Canasta uses the ill-gotten gold to erect a rigged casino. Bugs is disguised as a rube and appears to believe that a slot machine is a "tele-o-phone." He asks his mom for more money. The machine rings up a jackpot and a barrel of money comes out, to Canasta's shock. Bugs says: "Gee, thanks Mom" and wheels away his winnings in his bag. Seeing this, Nasty challenges Bugs to a series of crooked card games such as blackjack in hopes of parting Bugs from his winnings. Bugs continuously (though seemingly naively) defeats him. Nasty Canasta also rigs a roulette wheel, but it somehow fails when Bugs decided to play number 23 and wins; in the last round Nasty almost wins when the ball lands on a different number than 23 - which Nasty had blocked; however Nasty thinking he wins hits the table so hard that the ball lands in 23. Bugs ultimately gets revenge by rendering Canasta flat broke. Nasty tries to rob Bugs - who spins the pistol which shoots coins. Nasty tries to spin coins from the gun as well - and gets blasted.

Not only was this episode his first encounter with Bugs Bunny but also depicted him with a redesign. While still keeping the criminal personality and appearance he was fatter, and far more goofier than earlier appearances. He's also never regains the initial upper hand he has over Bugs, while in his encounters with Daffy he remains a threat throughout most of the episodes.

Nasty Canasta appeared in The Sylvester & Tweety Mysteries episode "B2 or Not B2" voiced by Jim Cummings, in his look from "Barbary-Coast Bunny". Unlike his other appearances, Nasty does not play a villainous role here. Instead, he is a champion bingo player, alongside his wife Inga. They are soon both put out of commission by the episode's antagonist.

Nasty Canasta appears in Looney Tunes: Back in Action in his look from "Drip-Along Daffy", voiced by Jeff Bennett. He works alongside Yosemite Sam and Cottontail Smith to obtain the map to the Blue Monkey Diamond from DJ Drake.

Nasty Canasta appears as a boss character in Bugs Bunny Rabbit Rampage, and an NPC in Looney Tunes: Acme Arsenal. 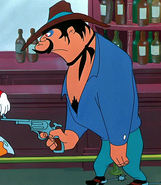 Barbary-Coast Bunny
Add a photo to this gallery
Retrieved from "https://looneytunes.fandom.com/wiki/Nasty_Canasta?oldid=203496"
Community content is available under CC-BY-SA unless otherwise noted.